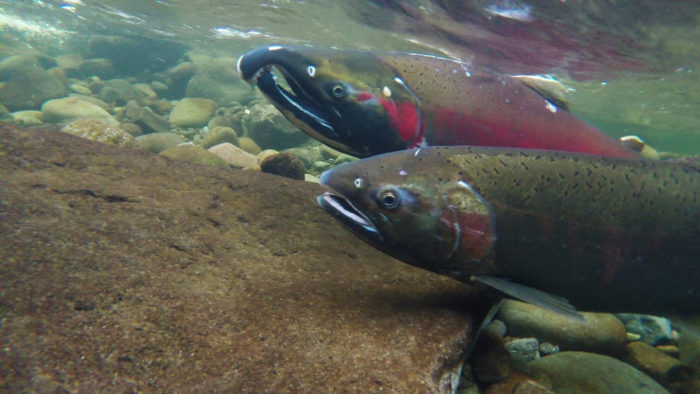 Salmon are slowly but surely losing their sense of smell and fear for predators, according to researchers at the University of Washington.

Previously, salmon were able to sense that predators in an area were leaving, but now that their natural waters are becoming more polluted with carbon emissions, their sense of smell as a breed is becoming obsolete. Salmons use their sense of smell to navigate, hunt, and avoid danger, but the toxins in the water are making it harder and harder to do so.

According to Chase Williams, a researcher at the University of Washington, salmon are able to smell predators by smelling a certain compound that is released when the predator is eating another fish. By smelling this chemical the fish swims away to a safe space, but now the ocean is changing.

So what’s causing this change? A fatal mixture of carbon dioxide emissions, deforestation, and global warming has caused an increasing amount of heat to be trapped within the ocean waters. Because of this, the water’s natural chemistry is changing to be more acidic.

The researchers had been noticing that wild salmon were acting a bit strange, so they decided to run a test where they made all environmental factors the same as in the wild to see if they could pinpoint the problem. During the experiment, the salmon living in more acidic water stopped avoiding the scent of their predators like they would in the wild.

With this finding in mind, scientists are quite worried about the livelihood of salmon in the wild if they are slowly evolving to become vulnerable prey. Ocean ecologist Francis Chan from Oregon State University explained to KUOW.com a little about how salmon function and the possibility for their survival in the future:

“Pretty much all fishes have that acidification-sensitive neurological pathway. Now that will probably get played out differently depending on species, but the results that are being reported suggest that more and not fewer fishes face challenges from acidification.”

Unfortunately, these researchers don’t believe there is much they can do about this problem until the Trump administration releases their final budget for the NOAA Sea Grant program. This is a program that would focus on providing cleanup to seaside communities and water filtration programs in hopes of eliminating the acidic water. As for right now, the federal government has not given any updates on the standing of this bill.

This acidic water also brings up another problem, the quality of the salmon found in the wild. Even though farmed salmon has more than three times the amount of saturated fat as wild salmon, it may be a good idea to stick with the farmed fish to cut down on the number of toxins consumed.