Mornings with a Two-Year-Old Rebel

Baby Juliza is 2 and a half years old now. Old enough that I may have to stop referring to her as “baby” Juliza soon. You would think that sometime during that period, she would have learned how to sleep. As in all the way through the night. Not halfway. Not a quarter. But all the way. Don’t get me wrong. It happens sometimes. But not often enough that I can plan on it. So when Walmart asked me to share our morning routine, I was really, really hoping that I’d be starting the morning off in her room, after both of us had a happy, restful night’s sleep in our own beds. 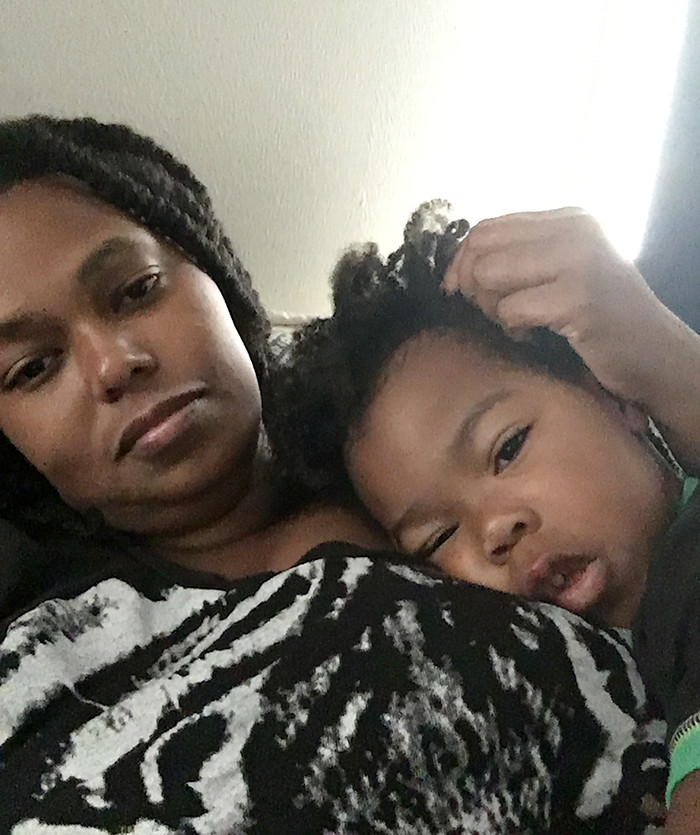 Thanks to a 3am wake-up that would not be ignored, we woke up this morning with her slung across my chest. I guess I’ll just have to enjoy the cuddles while they last.

Juliza and I are still nursing, so each morning’s wake-up is usually accompanied by a quick (or sometimes not so quick) nursing session. We’re approaching the 3-year mark in our breastfeeding journey, and I admit that I’m hoping she’s over it by her birthday. But for now, I’m happy I can still provide an easy breakfast and comfort for her when she needs me.

After we nurse, our next stop is usually the bathroom, particularly if her overnight Pull-Up is still dry. We’re working on potty training, slowly (mostly because of my lack of consistency), so I do my best to get her to go in the standalone potty we got at Walmart. I found it to be more effective than a seat that goes on top of the toilet.

Next stop: A new Pull-Up, typically accompanied by Burt’s Bees ointment, Aveeno lotion and a change of clothes. 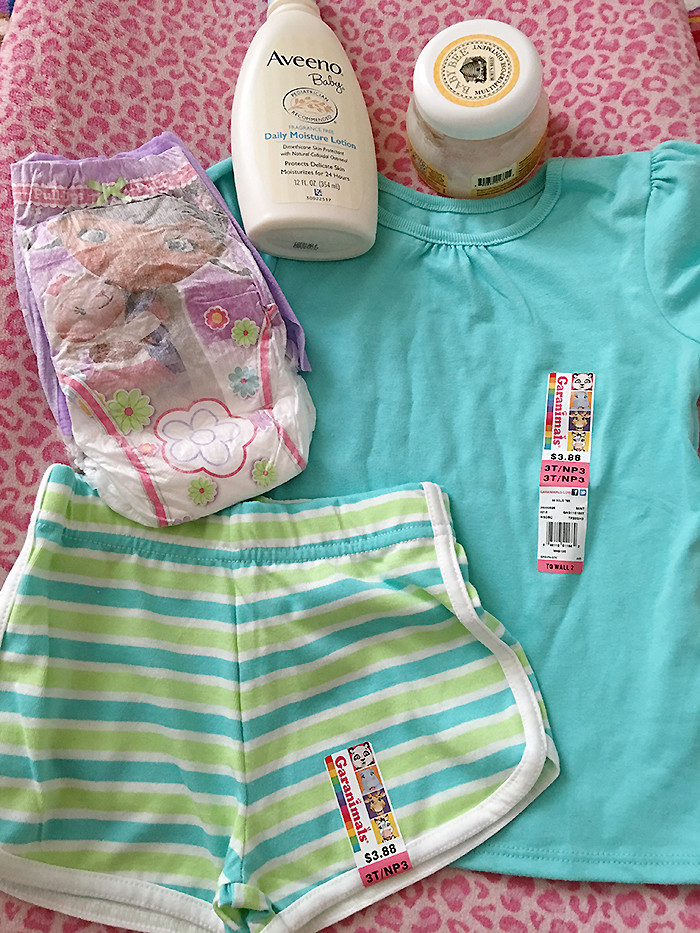 Since we’re potty training, I’ve had to stay away from onesies that snap between the legs. They’re too hard to take off when I’m in a hurry to get her clothes off. I’ve had to switch instead to casual dresses or tops and shorts. We grabbed some new Garanimals separates from Walmart that are cute and comfortable enough to be worn all day, and inexpensive enough to take the beating I know Juliza will put on them. 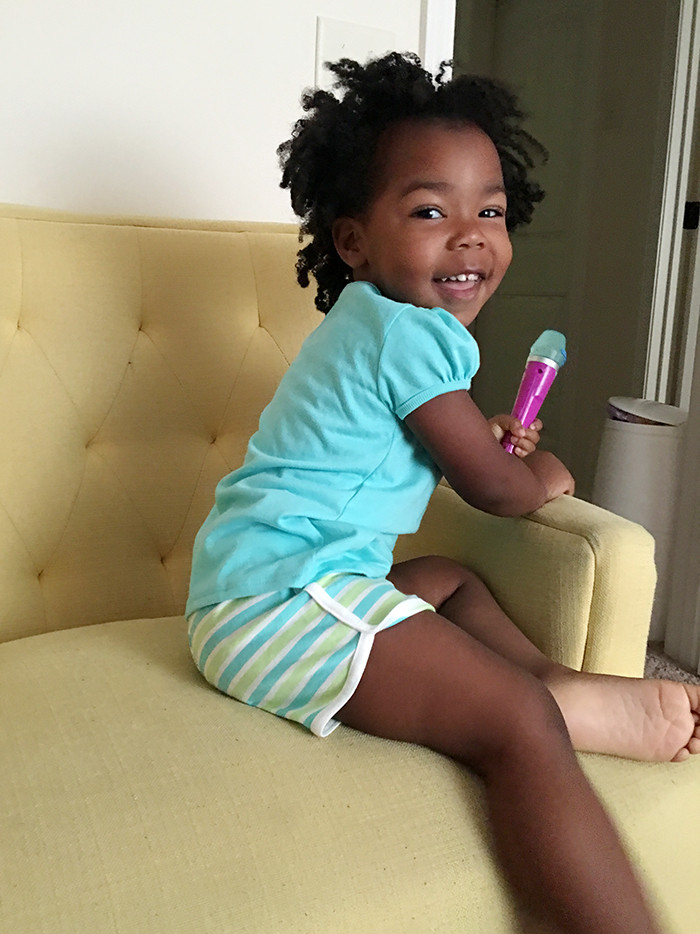 Case in point, it took her all of 30 minutes to spill something on her shirt.

Anyway, after we get dressed for the day, we head to the bathroom to brush our teeth together. We’re still using Orajel training toothpaste, which we find at Walmart, because Juliza still has a habit of sucking on her toothbrush before she starts brushing. 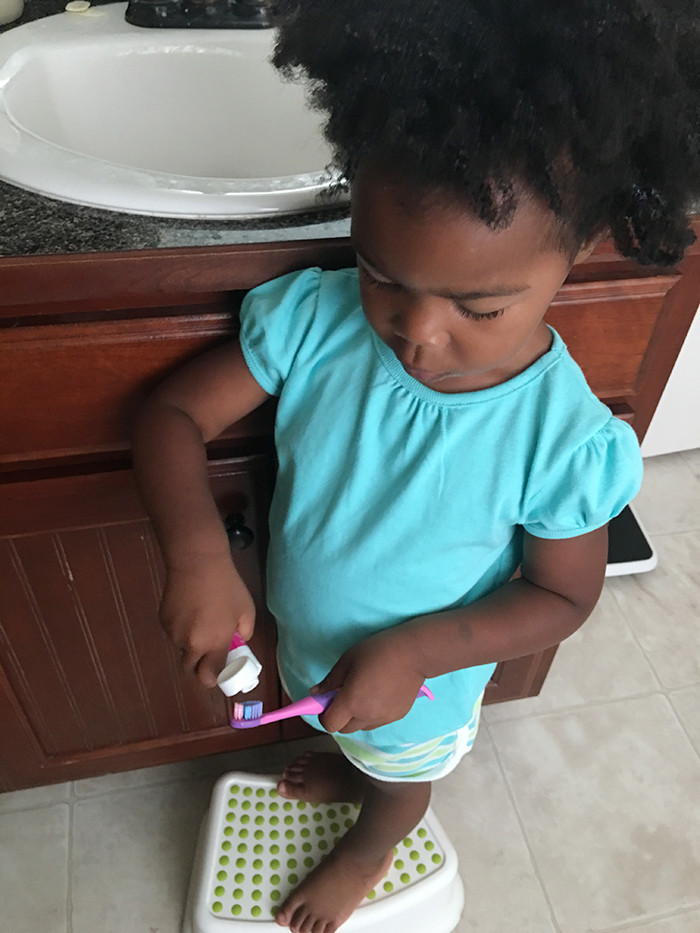 And of course, she has to put it on the toothbrush herself. Because two-year-old.

Finally, we head downstairs to eat breakfast and start our day. Aside from not knowing whether Juliza will wake up in her own bed or in ours, our morning routine is relatively predictable every day. What happens after we head downstairs, though, is significantly less so. Because toddler.

(Related: Read how Bradley compares the waterpik aquarius and ultra here to find out which is the best one for you)