I’m guilty of blender envy. You see, my husband and I have had our old, basic blender for almost as long as we’ve been married â€” and we had our 10th anniversary this past July. There was nothing particularly wrong with our old blender. It just wasn’t very powerful. Which meant blending for long minutes in order to crush ice or turn a protein shake into something drinkable rather than something resembling flavored chalk.

So when I went to Walmart headquarters in Bentonville, AR a few weeks ago and got to see for myself what a better blender looks like, I was thankful. But when I learned I’d receive a Ninja Ultima blender to review, I was ecstatic!

The box alone tells you this thing is a beast â€” in a good way. 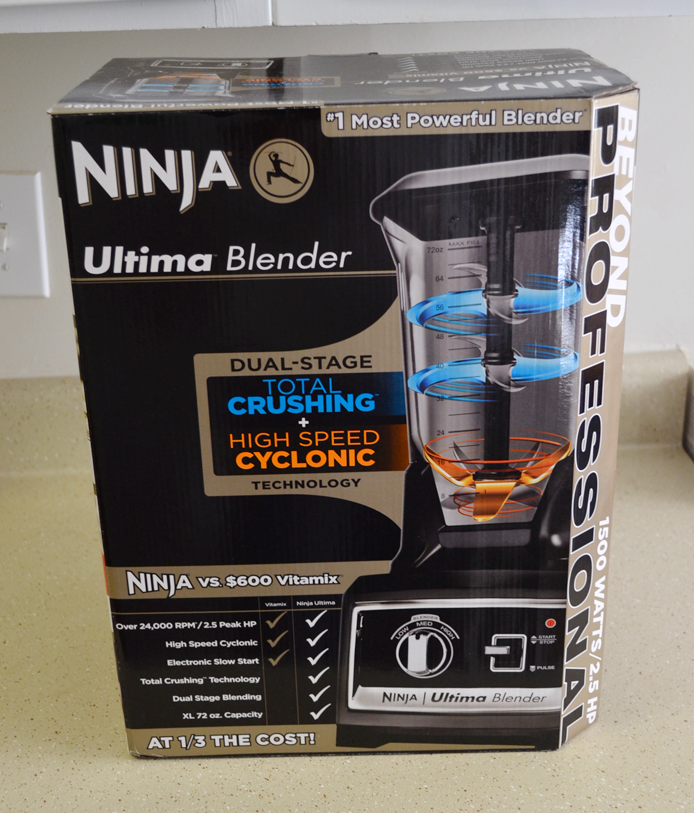 But when I took it out and stood it next to my old blender. Well â€”Â let’s just say it’s like putting a shiny new Mercedes Benz next to a rusty old pickup truck. Nothing wrong with the truck, per se, but man, did I want to try the Benz! 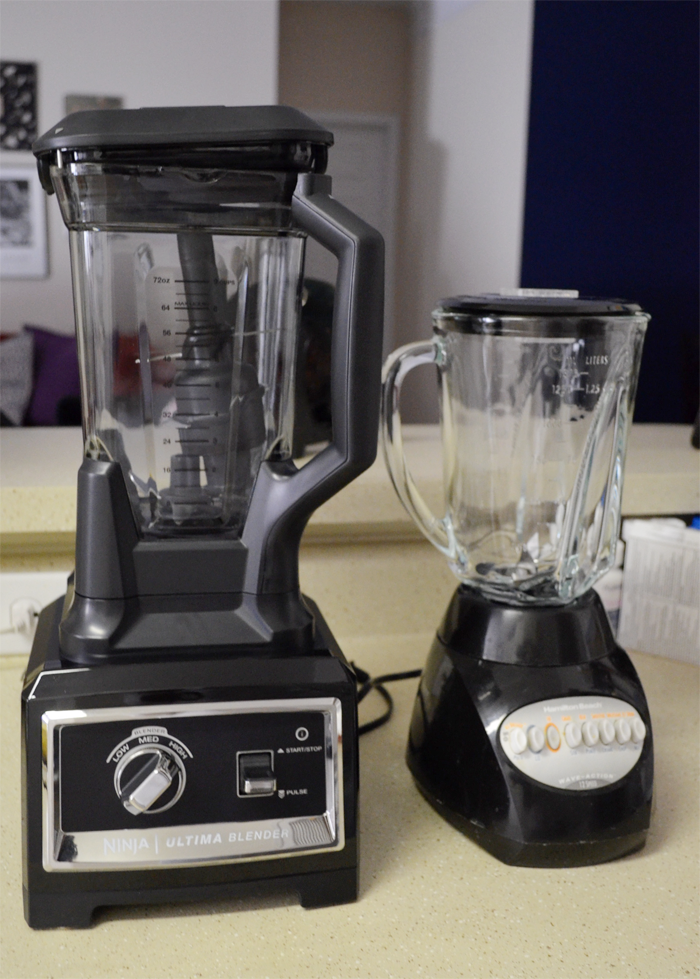 I’ve said before that we are a smoothie loving family, and we make them fairly often â€”Â mostly because they’re pretty expensive to buy on a cup by cup basis. So to test out the blender, it only made sense that I’d try my all time favorite smoothie recipe: Strawberry banana. 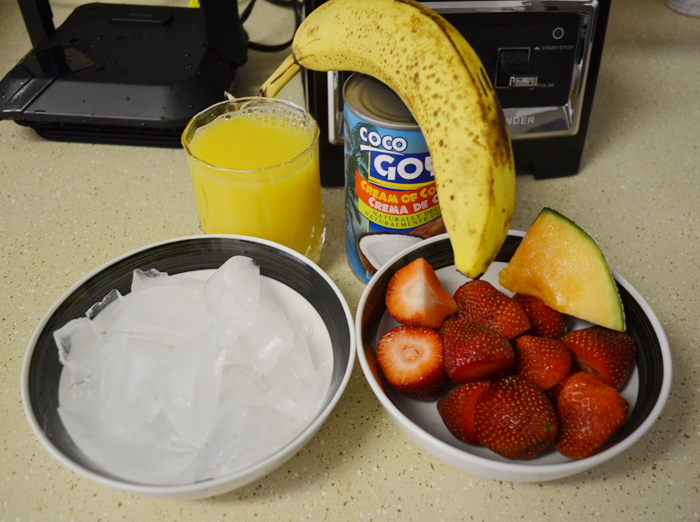 We also use orange juice and a tiny bit of cream of coconut. This time, we had some cantaloupe on hand, so I added a bit of that too.

First, the capacity of this blender is enormous. If I had put all of this in my old blender, it would be filled to the brim. The Ninja, however, had room to spare. Plus, the lid has a handle that also acts as a lock, so there’s no need to hold the cover while blending.

Good thing, too, because this blender is powerful. Want to hear it for yourself? You may want to turn down the volume on your computer first:

Like I said, it’s powerful. And loud. But boy does it work well, and fast! The smoothie was blending to perfection in about 30 seconds flat, even with pulsing first. The ice and fruit were pulverized, and I couldn’t pick out pieces of them if I tried.

In fact, the smoothie was blended so well that next time, I’m going to use less orange juice so that the consistency will be a little thicker. We had gotten so used to using lots of juice in our old blender, because otherwise, we’d have a really chunky drink. Now, I know I won’t need to do that any more. 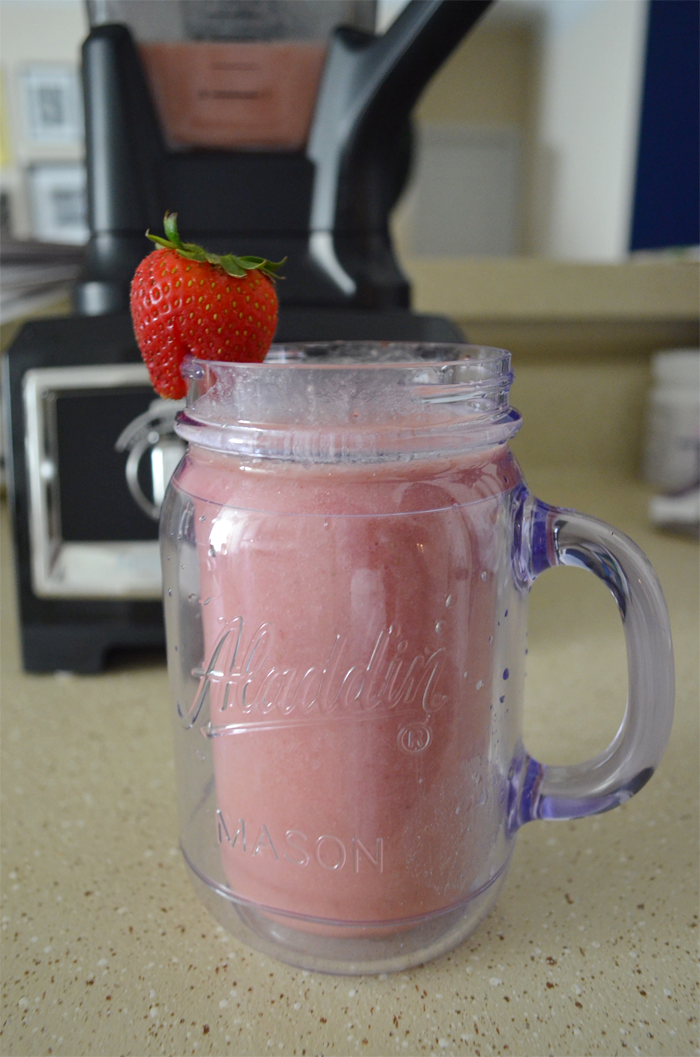 It is as delicious as it looks.

The Ninja Ultima also came with a recipe book, and I am itching to try a bunch of these recipes, including one for salsa and even a couple for soups. 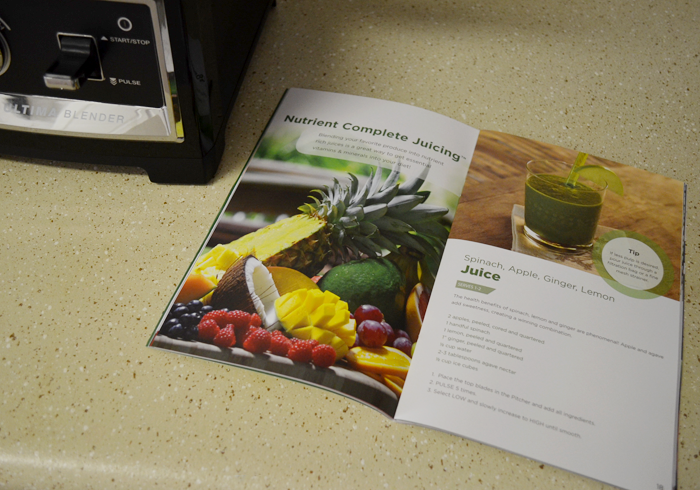 To say where has this been all my life would be an understatement. This blender is powerful and easy to use. My only caveat is that it does take up a lot of space. So much, in fact, that we’ll have to keep it on the counter, because it can’t fit on our cabinet. That’s not really a problem, though, as I forsee using this a lot. So having it close at hand will be easier anyway 🙂