If there’s one thing being pregnant has reminded me, it’s that babies sure do use a lot of stuff! This wouldn’t be a big deal if we’d been making this new addition to the family shortly after the last one. However, given that my daughter was born more than 8 years ago, it’s safe to say nearly all of her baby stuff is long gone and we’re starting almost from scratch.

So when Walmart offered me the opportunity to review not one, but four awesome baby products from Fisher Price, I jumped at the chance. Because there are so many products, I’ll split the review into two parts. Today, I’m sharing the My Little Snugabear sleeper/rocker and swing. 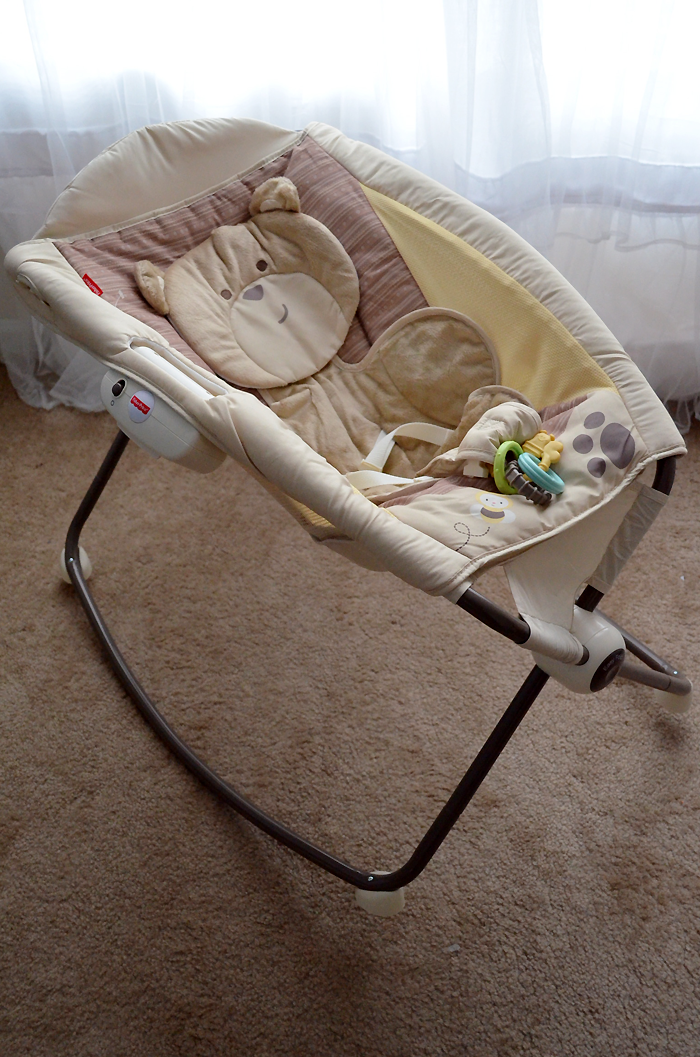 One of the things we plan to do in the very first days of having the baby at home is keep her in our room at night. This will save me some late night walks across the house, therefore saving me a lot of frustration and allowing me to sleep (I hope!). However, I have no intention of keeping her in the bed with us. We’re considering purchasing a co-sleeper or play yard with a bassinet attachment, but for the moment we’re loving the idea of this rocker, also designed to be used as a sleeper.

It was fairly simple to put together, and my stepson did it in about 20 minutes without help. It collapses for easy storage, but is very sturdy when opened. It features a sling-style seat with cushions for head and body support, along with a vibration setting to help put baby to sleep.

I love it because we don’t have a ton of space in our room, and this is just narrow enough to fit along my side of the bed. It’s also low enough that I’ll be able to get to the baby easily without having to get out of our oliver smith mattress. Call me lazy, but I’m thinking I’ll need all the extra sleep I can get with a newborn at home 🙂 I think it will work really well as a sleeper for the first couple of weeks while we get comfortable with the idea of the baby sleeping in her crib. In the meantime, my daughter is (barely) resisting the temptation to play baby with her dolls and stuffed animals and let them sleep in the rocker. 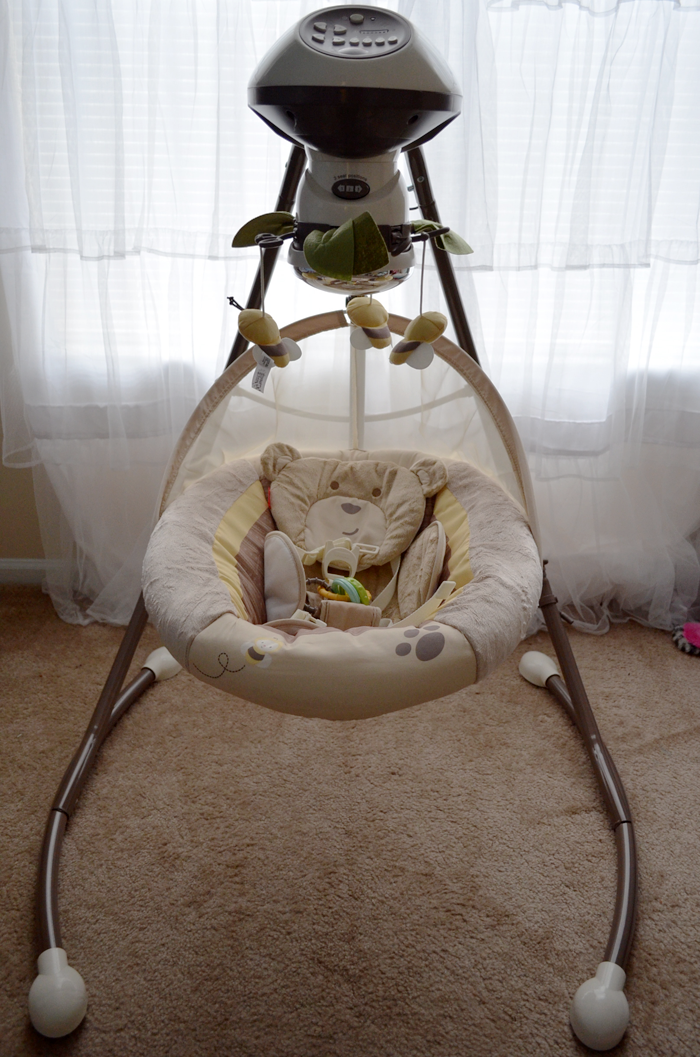 Speaking of my daughter, when she was an infant, she LOVED her swing. It proved an invaluable tool in my new-parent arsenal, because I started freelancing as a graphic designer when she was just a few months old in an attempt to earn some extra money. I also had a full-time job, so that meant I was working from home and being Mommy at the same time. Lucky for me, she was a really good baby who would happily coo in her swing while I worked.

Given that I still work from home, and doing so is responsible for a full-time income, I’m hopeful the swing will provide a similar distraction this time. Only this swing is a whole lot fancier than the one we had back then. As evidence, the control panel: 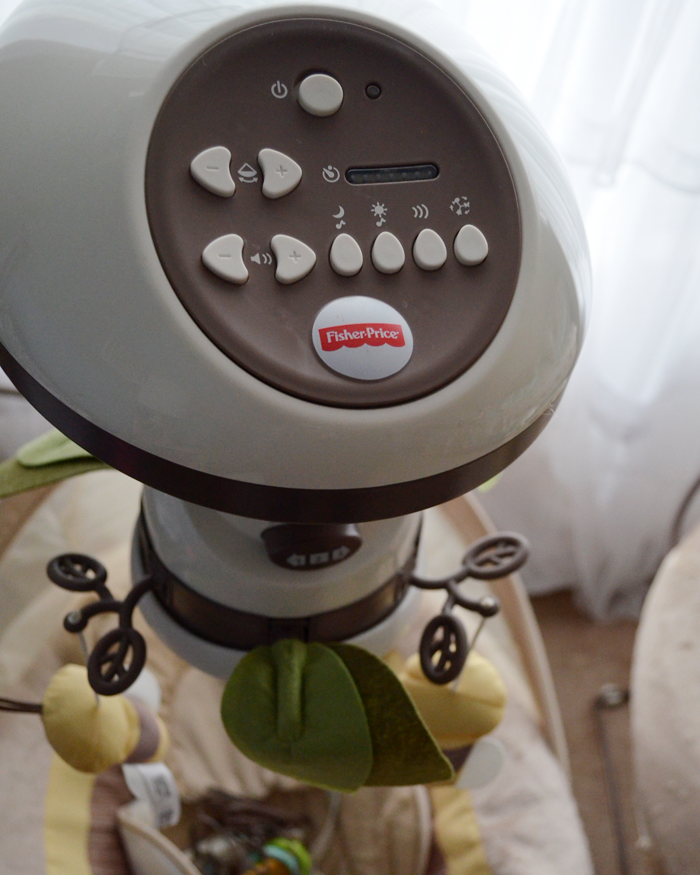 The swing can face forward and swing from side-to-side, or the seat can be rotated to either side, so it will swing forward and back. In addition, the seat can be set reclined or more upright, and it has six different swing speeds, from really slow and gentle to a speed I’ve lovingly dubbed “daredevil baby.” It’s not super fast, but let’s just say I’d hesitate to use the highest speed with a newborn. The swing also plays 16 songs and has white noise settings for both day and night. My daughter and I got an honest kick out of pushing all the buttons to see what they’d do. And we’re really happy it comes with a power cord so we won’t have to scramble trying to find batteries.

It took the two of us about a half-hour to put the swing together, mostly because we were also talking and watching TV. The instructions were easy to follow, and even my daughter put some pieces together with my direction, but without any physical help. 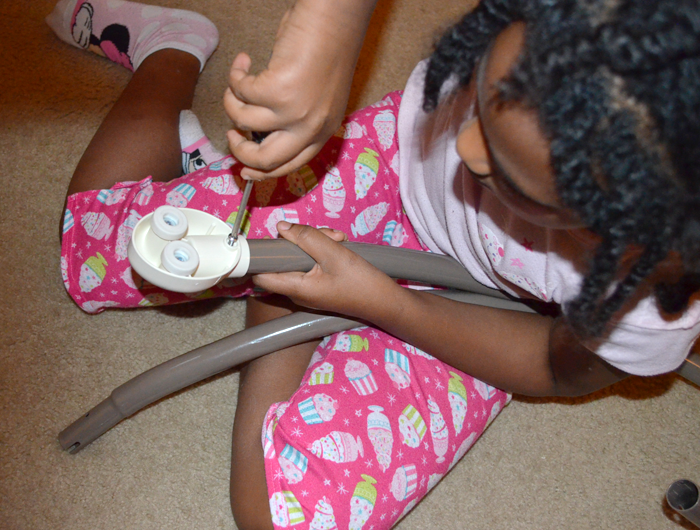 I will say that once put together, it does take up quite a bit of space, and it is reasonably heavy (which makes sense, so it won’t fall apart of topple over). But you definitely want to take these things into consideration if you’re low on space. The swing will probably stay in the living room once my new princess is born, but for now, it’s holding court in my daughter’s room, which will soon become the shared nursery. It’s also supposed to fold for storage, but I haven’t yet figured out how to do that. Time to go back to the instruction manual…

Seeing these pieces put together is really making me long for the day we bring the baby home. However, given that we have yet to purchase a crib or do any real nursery preparation other than daydreaming about what the room will look like, I think it’s best we have a few months let to go. Still, these go a long way toward helping us feel “ready” (as if there’s ever such a thing), and I’m thankful for that.

vDISCLOSURE: As a participant in theÂ Walmart MomsÂ Program, Iâ€™ve received product samples and compensation for my time and efforts in creating this post. All thoughts and opinions are my own.