With a husband and brother who served in the military and a sister and brother who still do, supporting those who serve in our nation’s armed forces is extremely important to me. My family and I are forever grateful for servicemen and servicewomen and the commitment they’ve made to keeping this nation free and safe, and I don’t think it will ever be possible to thank them enough. 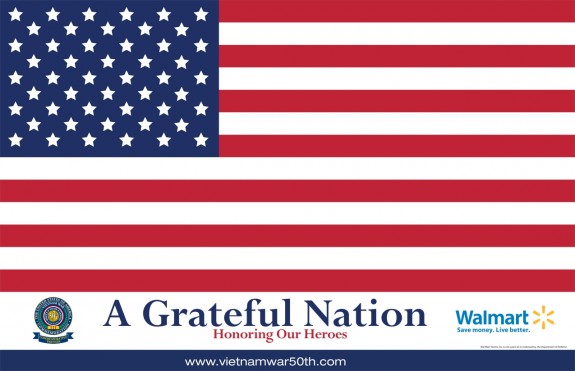 Of course, that doesn’t mean we shouldn’t try.Â  With Veteran’s Day approaching, Walmart has devised a special program to show appreciation for all these brave men and women: the Flag of Thanks campaign. Starting next Monday, November 11, the 4′ x 6′ Flags of Thanks, shown above, will be posted in most Walmart stores throughout the nation, allowing customers to write notes of thanks to military personnel for their service to our country. When each flag has been filled with notes, the store manager will arrange to present the Flag of Thanks to the local VA Hospital Center. If there is no VA Hospital nearby, then the flag will be presented to a local VFW or American Legion.

This is such a quick, easy way for any person to contribute to saying a huge thanks to our service members, and I’ll definitely make a point of writing a note at my local store.

However, even if you miss your in-store event, you can show your support via Walmart’s iThanku app on Facebook. You can share photos, videos or messages saying thanks to both active duty troops and veterans. And some of the messages delivered via the app will be shown during the 2012 Carrier Classic on NBC Sports today at 4 p.m. So get your messages in fast! It only takes a second.

Watch the video below or click here to learn more about what Walmart is doing for the military and veterans.

DISCLOSURE: I am a member of the Walmart Moms program. Walmart has provided me with compensation for sharing their iThanku and Flag of Thanks campaigns with you. Participation is voluntary and, as usual, all opinions are my own.