For about 2 months, my daughter has been begging for an American Girl doll. Knowing that they’re pretty expensive, I pushed the request to the back of my mind, thinking I’d put it under the Christmas tree as her “big” gift. Still, yesterday, I decided to go to the American Girl site to see just how much it would set me back and which doll I might get for my daughter.

I just knew that, in this day and age, there would have to be at least one or two dolls that look like my daughter and other little girls like her: smooth chocolate skin, beautiful features, etc.

So imagine my surprise and disgust when I discover this: 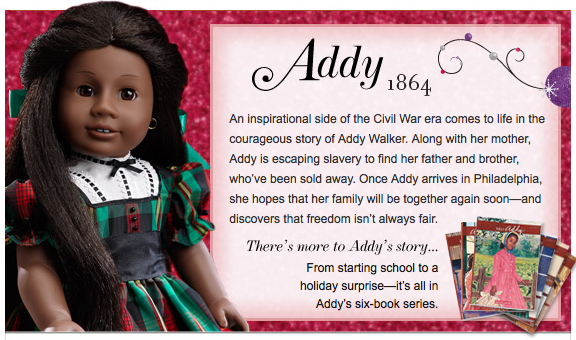 Yes. That is a black American Girl doll. Who is a slave. Wait. An “escaping” slave.

The headline of this post is so obvious that it should go without saying. But apparently, in some circles, it’s not entirely obvious that a slave doll wouldn’t be a good idea. So let me say it, in no uncertain terms.

Let me give this some context. This doll is part of the company’s historical character collection, which also features “resourceful”, “patriotic” and “optimistic” dolls of other races set in stories from centuries and decades past. And as I recently learned, Abby is not new. In fact, she has been on American Girl’s shelves for many years.

Here’s the problem. Of all the potential situations in which they could have set an African American doll in history, slavery was the best they could come up with? She couldn’t have been the daughter of someone like Elizabeth Jennings Graham, a black teacher in the 1800s who also won a civil rights case after she stood up for herself when being forced off a streetcar? An aspiring artist or poet during the Harlem Renaissance? Or for heavens sake, a child witnessing history being made during the Civil Rights movement? I could think of at least a dozen other possibilities off the top of my head with a more positive tone than the one the company chose.

I would sincerely like an explanation. Were there no objections to this doll throughout the planning and production processes?

Say what you want about the historical reality of slavery, because we all know it happened. However, there are plenty of other ways in which my daughter will learn about the atrocities committed against people who look like her in this nation’s past. She’ll have a lifetime to learn about the prejudice, racism and white privilege that are still present today. I don’t need her learning that lesson from a doll that is supposed to be a treasured toy that teaches her about friendship and resilience. That lesson is tough to swallow when it comes in such a sad package.

In fairness, they do have another black doll. Cecile, from New Orleans, who is not a slave and, from the literature on their website, who tries to help others in need. Because of this other doll, there will be some people who say I shouldn’t be upset when I could just buy that one. Well, simply put, I can’t imagine why I’d want to spend my money with a company that thinks a slave doll is not just OK, but a good enough idea to sell under the guise of a sickly sweet story about how she learned “freedom isn’t always fair.”

You have failed, American Girl, and it will take a hell of a lot more than a half-assed apology via a press release before you’ll ever get me spend my money on any of your dolls.

No matter how long she’s been around, it’s high time you take Addy off the shelves and invest in sensitivity training for your employees and executives. Little black girls deserve better.