I’m in my seventh week of following the Shaklee 180 weight loss program, and I’m feeling pretty good. The pounds are going away, slowly, but surely, and I’m feeling more confident in myself than I have in a long time. Need proof? I felt like a rock star for my anniversary when I spent a night out with my hubby: 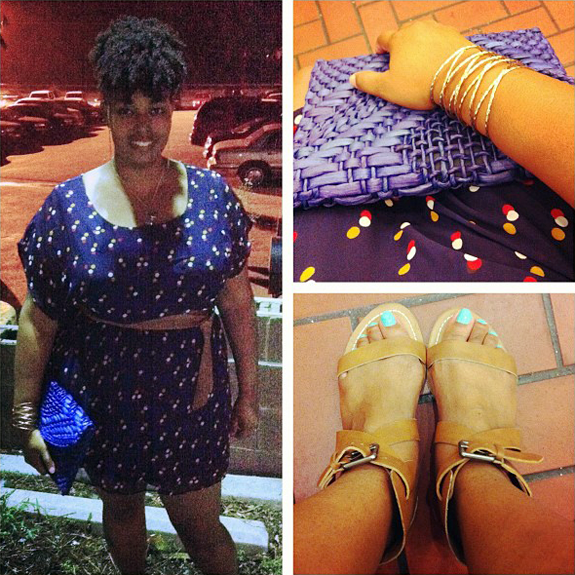 I have to admit, though, there is one thing in particular that I’m struggling with.

I’ve fallen back into my old habit of not eating in the morning â€” at least not for several hours. I generally wake up about 7:30 or 8 a.m. to feed my dog and take him outside. Given that I live on the third floor of my apartment building, this generally means that I’m wide awake by the time I get back upstairs. In other words, this would be the perfect time to eat breakfast. But do I? Sadly, rarely. Instead, I start doing other stuff and it’s sometime between 9:30 and 11 when I finally get around to “breakfast.” Not good. I’ve read that we should eat within an hour of waking up, and no more than 12 hours after eating the night before to jump-start our metabolism for the day. So I’m failing miserably in that regard.

I also tend to eat dinner pretty late because I like to work out in the evening rather than the morning. I’m working on design and blogging projects until about 5 or 6 p.m., so after I work out for an hour and cook dinner, it’s often after 8 p.m., or sometimes even 9, by the time I eat. Again, not good. To compensate, I try to stay up a bit later so I’m not going to bed immediately after eating. Which just perpetuates the cycle of eating late in the morning instead of immediately upon waking up.

Over the next several weeks, I really need to set, and stick to, an eating schedule. I’ve been doing really well about staying within my daily calorie goal, but I know that eating at regular intervals will help my body lose faster.

To be fair though, in all this, I’ve still managed to lose some weight 🙂 Here are my current weight and measurements for your viewing pleasure: 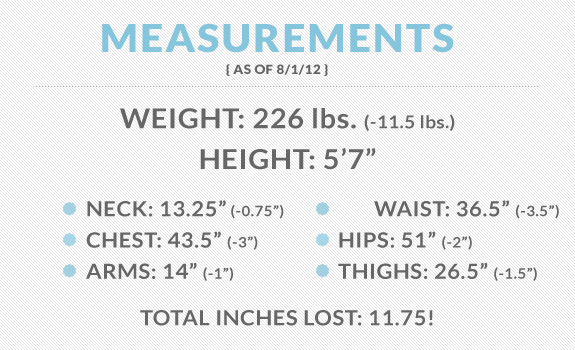 At the end of the 6-week mark, I had lost a total of 11.5 lbs., which put me just a half-pound shy of my 12-pound goal for that period. I’m feeling pretty good about that! I’m still determined to lose 16 lbs. by the end of 8 weeks, so I’m really going to have to work on that eating schedule. And that 11.75-inch total loss? Icing on the cake!

Speaking of cake, tomorrow is my daughter’s birthday. She wants cake, of course. I’ve been really good about avoiding the sweets I used to binge on, like chocolate chip cookies, ice cream and cupcakes. So having cake â€” cupcakes, at that â€” paraded in front of me will be a challenge. However, the one thing I’ve learned throughout this journey is that I can really eat pretty much anything in moderation. What’s hilarious about that realization is that it makes me want to make healthier choices. I thought for sure that the idea of “eating anything I want” would make me want to indulge in a little bit of everything (including junk food, fast food and the like). But why eat a 500+ calorie hamburger from McDonald’s when I can make a 200-calorie turkey sandwich at home and know exactly what’s in it? Why eat ice cream when I can make a thick, fruity shake that I’m actually supposed to have? Right?

But I’ve decided that for of my daughter’s birthday, I’ve decided to indulge this once. I will eat one cupcake. ONE. Not 2-3 like I normally might have. And I will work out that day, even if I don’t feel like it. And I will stay under my calorie goal for the day. Period.

And if I’m lucky, and I work out the kinks in my routine, I hope to be down 14 pounds total come next Wednesday. Cross your fingers and wish me luck!

Disclosure: I was chosen by Shaklee to be a #Cinchspiration blogger. As a result, I will receive a 6-month supply of Shaklee 180 products along with online support and incentives as I document my journey. As usual, all opinions are authentic and mine. Results and experiences are unique for each person, so results may vary. People following the weight loss portion of Shaklee 180 can expect to lose 1-2 pounds a week.