It’s Girl Scout cookie season, and I’d be a liar if I said I didn’t already buy a few boxes. But I can make this promise: I won’t be buying any more. This probably sounds harsh, but I have my reasons.

In general terms, I’ve known for a while what palm oil is doing to the rainforest. To make a long story short, palm oil is the No. 1 cause of rainforest destruction in Southeast Asia. These forests are being wiped out to make room for plantations to keep up with the world’s demand for palm oil. In addition to the fact that old growth trees that can never be replaced are gone, this deforestation is also wiping out the habitat of the worldâ€™s only orangutans, along with other endangered wildlife like pygmy elephants and Sumatran tigers. In fact, some palm oil plantation managers offer migrant workers $10 to $20 to for each orangutan they kill, because the animals have taken to eating young palm shoots just to stay fed.

I only recently learned of that last detail, and lets just say it was the straw that broke the camel’s back. 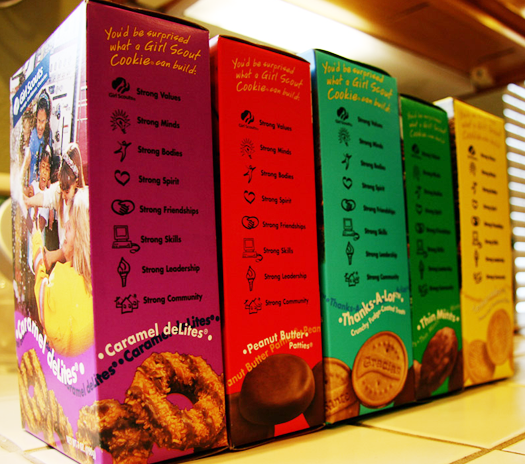 Lest you believe I am going on and on about nothing, consider this: The Girl Scoutsâ€™ British sister organization, the Girl Guides, already have eliminated palm oil from their cookies. They’ve also offered to help the USA division and Girl Guides Canada do the same. And there’s a bonus benefit to making cookies without palm oil: Replacing it with olive oil or canola oil also reduces saturated fat by 60 to 70 percent. In other words, this is a change that can, and should, be made. Not just by the Girl Scouts, but by anyone who is making food products with palm oil when there are healthier alternatives.

So from now on, I’m going to be very careful about buying products that are made with palm oil â€” and this is true of many pre-made baked goods. I’ll have to become more diligent about reading labels.

Rainforest destruction accounts for 15 percent of global greenhouse emissions. If you’re like me, and you want to do more than just avoid palm oil as a consumer, take a second to send a letter set into motion by two Girl Scouts who were appalled to learn what palm oil is doing to the rainforest.

The girls are also asking for your help in writing a letter to First Lady Michelle Obama encouraging her to intervene with Girl Scouts CEO Kathy Cloniger before itâ€™s too late. Click here to send the pre-written letter, in partnership with the Rainforest Action Network. More than 70,000 letters have already been sent, yet since Madison (â€œMadiâ€) Vorva and Rhiannon Tomtishen’s first and only meeting with Girl Scout executives in 2008, their efforts have been totally ignored. Let’s make sure that their voices are heard and send a letter!