There is no denying that the world is quickly becoming a more crowded, polluted place, and that we all need to make changes to preserve our own health and the health of the planet. People long have been encouraged to start with small changes, starting gradually until they can do more. Apparently, however, this ideology does not extend to corporations.

On a daily basis, I receive press releases or read news about large corporations â€” often ones known for their environmentally destructive policies â€” that have made a small change to make their products or production more eco-friendly. And before the ink dries, there are droves of self-proclaimed environmentalists decrying these changes as little more than corporate greenwashing.

Do I believe greenwashing exists? Absolutely. Do I believe that most of these companies are motivated to make sustainable changes based on the bottom dollar rather than altruism? Of course. Do I believe some of them use the small changes they make to woo consumers into believing their overall product is green when it really is not? Without a doubt.

But do I also believe we should celebrate the changes these companies make, however small? A resounding YES!

We must start somewhere

Let’s face facts. While there are a growing number of die-hard greenies in the world, there are many more people who don’t think twice about how their lifestyles and policies affect the planet. So no matter how much we talk about HFCS and complain about chemical-laden cleaning products, people are still buying them.

While my ultimate desire is for consumers to wake up and stop buying these products so manufacturers will be forced to change because the market demands it, I am a realist. When a corporate giant makes a small change for the better, the resulting impact can be huge. So instead of immediately shooting them down when they do something good, wouldn’t it be in our best interest to celebrate their efforts while encouraging them to do more?

Understand that I’m not talking about the brands that flat out lie to consumers about what is in their products or use misleadingly words like “Organic” and “Natural” in their names knowing that brand names can’t be regulated. I’m talking about those companies who make products that consumers are already buying, and which they are likely to KEEP buying.

For example, Heinz recently announced that it would start using bottles made of 30% plant-based plastic. Coca Cola’s patented “PlantBottle”, made from up to 30 percent plant-based material, will now be used for Heinz ketchup. Heinz says it will convert all of its 20-ounce bottles in the U.S. this summer. Predictably, the detractors pounced. The following comments are among the ones posted on Treehugger’s Facebook page following the announcement. Commenters’ names and pictures have been obscured to protect their privacy. 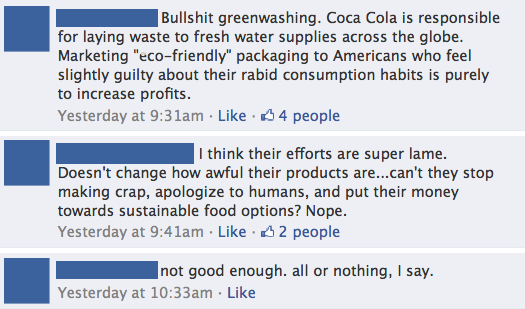 There were also positive comments, but I’ve seen ones with the exact sentiments expressed above often enough to be tired of them.Â  I’m much more inclined to listen to those who ask genuine questions, like whether the bottles will still be recyclable, or why these companies chose this option rather than 100% recycled plastic. I can even respect those who say they’d never use these products, but that they’re happy to see changes happening. But those whose scream “Greenwash!” but offer no tangible solutions? To sum up my feelings concisely and as politely as possible, go kick rocks.

The problem with an “all or nothing” attitude is that most people will realize they can’t do it all at once, so they’ll instead choose to do nothing. And we can’t keep going on as we have been, wishing away the corporate “devils” and crossing our fingers that things will get better. The corporations are here. Period. I’d rather spend my time building relationships with them and trying to teach them how they can do better than complaining about the problem without trying to fix it.