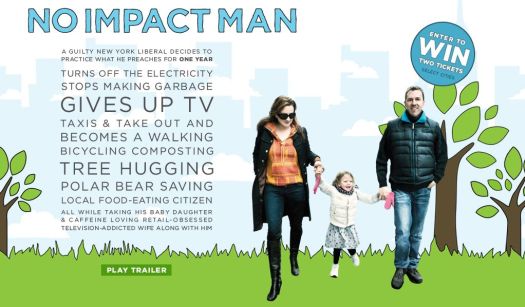 I like to think I stay pretty aware of what’s going on in the green blogosphere. So I feel more than a bit out of the loop given that I’ve only just learned about Colin Beaven, a.k.a. No Impact Man.

To make a long story short, Colin is a New Yorker who was feeling his fair share of green guilt and decided to do something about it. Except he took this idea to the extreme. Colin gave up almost all modern conveniences in his quest for a more sustainable lifestyle, including taxis, fast food, electricity and even toilet paper. To make the story even more compelling, his wife and young daughter are along for the ride too.

Colin and his family are the subjects of the No Impact Man documentary, which chronicles their yearlong journey and the challenges and victories that come with it. The idea is to determine whether all these so-called necessities truly have an impact on quality of life, or whether we’re all just too comfortable and complacent to do anything outside the norm.

His wife readily admits that the changes were incredibly difficult for her. Like many of us, she’s addicted to Starbucks and shopping for clothes, among other things that get under her husband’s skin. Don’t think this could be entertaining? Watch the trailer below and judge for yourself.

I don’t know about you, but I’m eagerly anticipating the release of the film in select theaters starting on September 11. Colin has been criticized as attention-seeking and only out for self-promotion, but I admire his fortitude. Call him what you will, but anyone who is willing to give up toilet paper and electricity must be pretty committed to the cause. I’m not sure I’d be willing to go that far. Though…it does make me wonder how he manages to write for his blog…