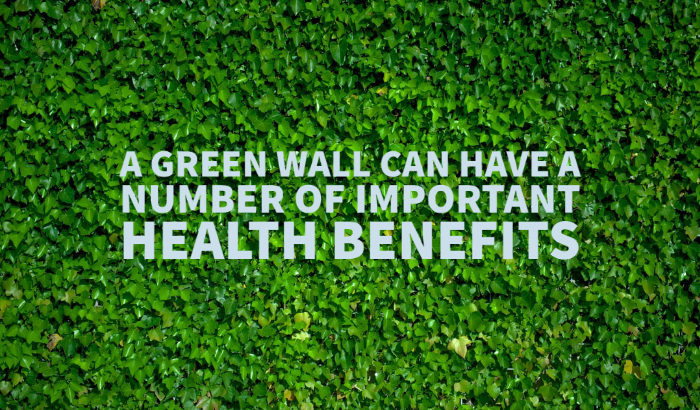 According to the EPA, Americans spend roughly 90% of their time indoors. These days, with the coronavirus pandemic still well underway, that figure is certainly even higher. Spending too much time inside is associated with all sorts of adverse effects on both our physical and our mental health.

While about 60 million Americans are covered by Medicare, there is a significant portion of the populace that has no coverage. Regardless of health insurance status, it is in everyoneâ€™s best interest to remain as healthy as possible. Making your green wall can be a helpful step in your wellness journey.

One of the reasons time indoors is so detrimental to our health is the higher concentration of carbon dioxide. The typical outdoor concentration of CO2 is roughly 300-400 parts per million, though it can exceed that range in places that have particularly high levels of industrial activity or traffic. Home air conditioners alone release roughly 100 million tons of carbon dioxide into the air, contributing to this figure.

However, concentrations tend to be significantly worse in the home compared with the levels outside. Inside the concentration can sometimes exceed 1,000 ppm when the home has a particularly high occupancy.

Prolonged exposure to carbon dioxide can cause such unpleasant and downright dangerous symptoms as dizziness, restlessness, headaches, sweating, fatigue, elevated heart rate and blood pressure, and at extreme levels asphyxia, convulsions, and coma.

The Benefits of a Green Wall

Odds are your home doesnâ€™t have high enough levels of CO2 to put you in any serious danger. However, itâ€™s always worth it to invest in methods to reduce the indoor levels of carbon dioxide as much as possible. An indoor green wall absorbs CO2 as well as other toxins that may be present in the air, and releases oxygen.

Plants also have a well-documented positive effect on mental health — one of the reasons places such as Florida bring in as many as 100 million visitors each year is the prevalence of lush and diverse flora. Greenery is known to have such valuable benefits as reducing stress and even improving memory and focus. Making a green wall allows you to bring these benefits right into your own home.