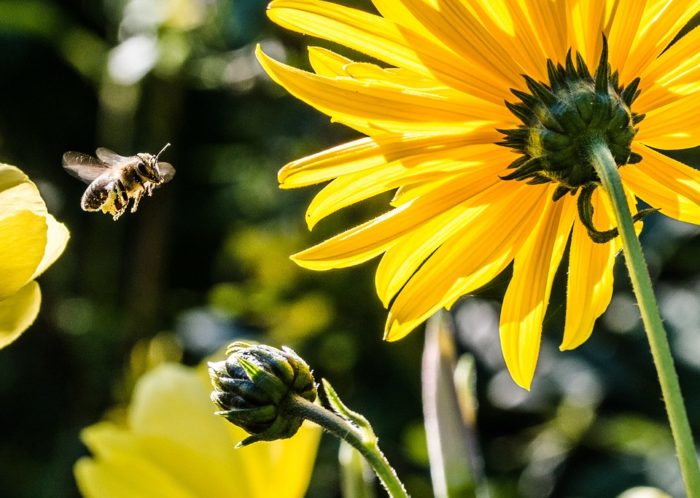 It’s no secret that the honey bee population is in decline, but a new study reveals that a common pesticide could be impairing their ability to fly. It’s called thiamethoxam, and it’s often used on crops such as soybeans, corn, and cotton.

James Nieh, an author of the study published in the journal Scientific Reports, says that he started questioning whether or not the pesticide may affect honey bee flight after previous research had already proven that it can make honey bees unable to return to their hives.

Honey bees can normally fly up to 15 miles per hour, but testing their flying speed after being exposed to the pesticide requires technology that isn’t quite available yet.

â€œSo we did the next best thing, which is to take it into the lab, and we used an existing technology called a flight mill, which I built and modified to use with honey bees for our particular experiment,â€ he says.

Considering the known harmful effects of pesticides on humans, it isn’t at all a stretch to say that they could also harm bees. It’s worth noting, however, that pesticides do have some advantages. They help maintain and preserve the freshness of nearly all plants in addition to preventing weeds, even on the grass on your front lawn — in fact, a well landscaped and maintained lawn helps reduce allergens such as ragweed, and pesticides have proven to be one of the only known options for protecting valuable plant life.

Still, there has to be a more natural and less harmful solution to using dangerous and toxic chemicals and pesticides to preserve the viability of crops. According to the CDC, one in six Americans gets sick by consuming contaminated foods or beverages each year, and pesticides are inevitably the cause of many contamination illnesses. And when you factor in the fact that 80% of all cancers are attributed to environmental rather than genetic factors, including exposure to carcinogenic chemicals, it can feel like you risk developing cancer as soon as you step outdoors.

Simone Tosi, postdoctoral fellow at University of California San Diego, is the study’s lead author. He says he plans to focus on other bee behaviors in the future.

“And the impact that other stressors have on them. For example, the locomotor abilities of the bee, so how do they move inside a hive, for example, and when they forage on a flower,” says Tosi.

As the dangers of thiamethoxam become more apparent, many countries are doing what they can to prevent its usage. Both the European Union and Canada are considering enforcing a complete ban of neonicotinoids, an entire class of pesticides that includes thiamethoxam. Not only that, but 35% of all households in America were growing food at home or in a community garden in 2014, and that number is still on the rise. As more environmentally-conscious people make efforts to grow and harvest their own crops, pesticides won’t be as necessary with smaller farms because humans can care for them more frequently without having to rely on harmful chemicals — unlike major farms that don’t have the human resources for farm maintenance and are forced to rely on pesticides.

What’s probably the most ironic about this discovery is that the EPA has decided to issue guidelines for the usage of pesticides, but they’re only voluntary, which means they’re highly unlikely to be followed. This decision was made on the same exact day as a federal report was released that concluded that thiamethoxam can in fact kill bees and individual larvae, but “most approved uses…do not pose significant risks to bee colonies.â€

Lori Ann Burd, the director of the Center for Biological Diversityâ€™s Environmental Health program, summarized the EPA’s actions perfectly: â€œThis is like a doctor diagnosing your illness but then deciding to withhold the medicine you need to cure it.â€