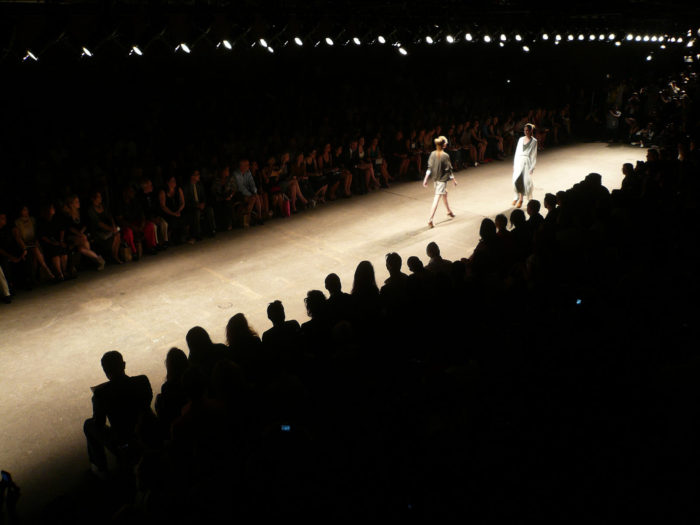 By now, eco-friendly fashion is nothing new. But while a lot of brands have succeeded in making textiles from recycled goods, they don’t always translate into wearable pieces. Unfortunately, eco-friendly doesn’t always mean fashion-friendly, too.

Retailer H&M is somewhat of an expert in green fashion, having launched several environmentally friendly lines in the past. But with the recent debut of their sixth Conscious collection, the brand has stepped up their game and has managed to create beautiful, high-end luxury pieces with an environmental twist.

With this collection, H&M wanted to show that sustainable clothing doesn’t have to be boring, outdated, or vaguely bohemian in aesthetic. The designers instead aimed to make their materials — some of them made from trash recovered from beaches — look delicate and expensive.

Arguably, one of the collection’s showstoppers was a plisse pleated gown made from a material called Bionic. Like much of the collection, it’s made from recovered shoreline waste, which is then formed into a polyester textile. While discarded plastic bags make up more than 10% of washed-up debris found on the U.S. coastline, each of H&M’s gowns is made from 89 recovered plastic bottles.

Since plastic waste is an ever-growing issue in the U.S., prompting everything from plastic bag bans to movements to take back the tap (water), H&M wants to make the idea of sustainable fashion much more mainstream.

In a phone interview with TODAY, Ann-Sofie Johansson, H&M’s creative advisor at their Sweden office, explained, “I think people still have a bit of a misconception when it comes to sustainable fashion — that it is beige skirts and linen things that used to exist in the 1980s and 1990s…We show that sustainable fashion can look this good.”

This year’s release also shows you don’t have to be a grown-up to embrace the green fashion movement. For the first time, H&M also released a sustainable children’s range, complete with tulle dresses and structured jackets.

The brand has also stated a company goal to use only sustainably sourced or recycled materials in all of its offerings by 2030. Currently, the brand uses those materials in only 26% of all its products.

But they’re taking their lofty ambition seriously. Sustainable fashion, according to Johansson, is “the only way we can continue to exist in the future.”

The brand is also doing its part to encourage innovators to find new ways to use recycled goods to create new textiles. They’ve even dedicated an entire award to the cause. This year’s Global Change Award competition picked five winners, including Vegea, an Italian-based company that makes leather from grapes. Leather is actually one of the longest lasting natural materials on the planet. In 2008, archeologists found a 5,500-year-old pair of bespoke leather shoes, which they said were still “remarkably well preserved.”

If nothing else, H&M proves the old adage that one man’s trash can be another’s treasure — and for many clotheshorses, it’s especially spectacular when that treasure can be hung in their closets.