The Secret to Cleaning Up After a Toddler: Dyson Cordless Vaccum

Baby Juliza has a nickname: I call her the Hurricane. Because that’s what life with her often feels like: A whirlwind of activity after which I have to clean up. This child will take DVDs out of their cases, then take the cases apart. She tears through paper like it’s an Olympic sport, into pieces so tiny I swear it’s reverted back to wood pulp. And then there are the crumbs. Oh, the crumbs. No matter what she’s eatin1g, pieces of it end up on the floor. Most of which is carpeted. Because toddlers gonna toddle. So when Walmart offered me the opportunity to try the new Dyson V6 Slim cordless vacuum, it felt like someone had offered me the Holy Grail. 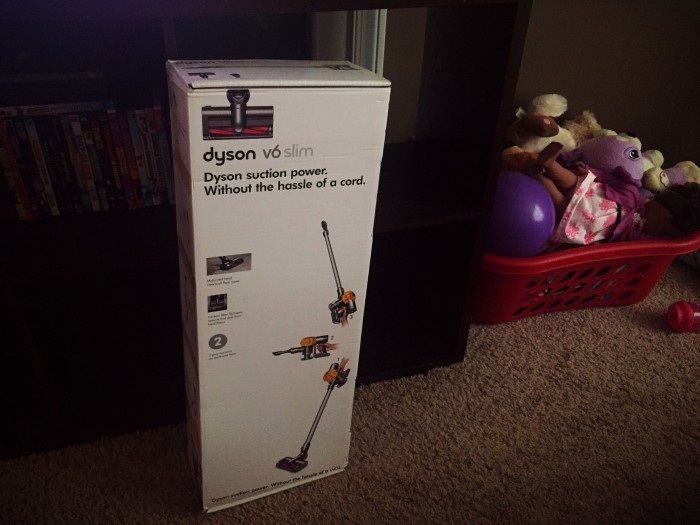 Understand something: Our previous vacuum sucked. In the colloquial sense, not the functional sense. I could vacuum the living room, then spend 15 minutes on my hands and knees afterward picking up all the stuff it had left behind. It had gotten to the point where picking it up by hand felt like less of a waste of energy. So I was only too happy to test Dyson’s new little powerhouse.

The V6 Slim, exclusive to Walmart, is designed to be lightweight and easy to use, all without a cord. In my opinion, the magic lies in that last fact. When it is fully charged, it can get 20 minutes of run time — more than enough time to vacuum my entire living room. On “max” power, it can get 6 minutes of run time on a full charge, but I found that I didn’t need to use max power to pick up everything. And when I say everything, I mean everything: 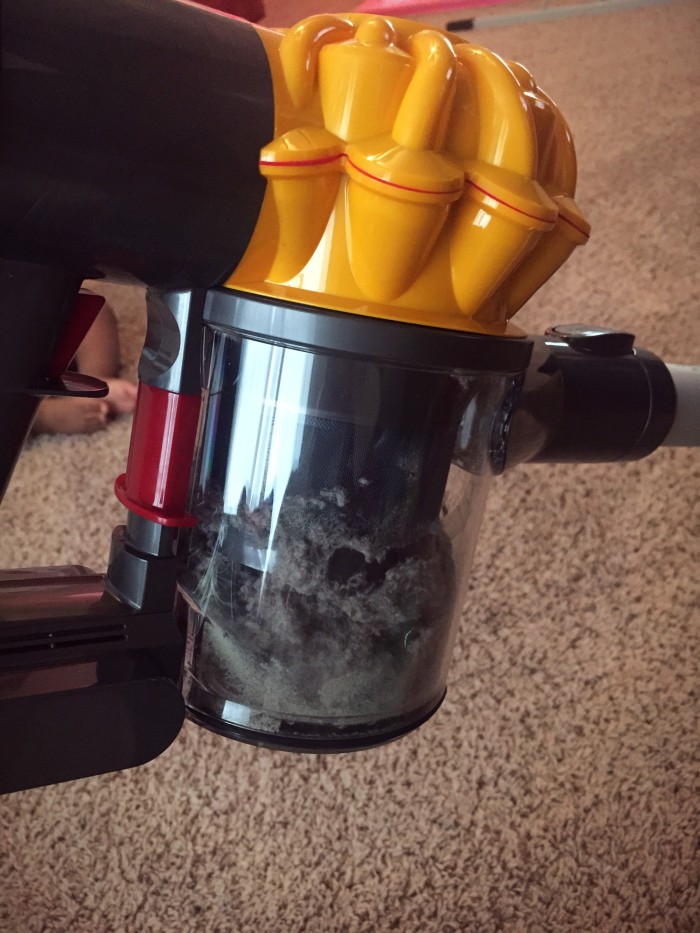 And this was just 2 days after I’d vacuumed with my other machine. I think it’s safe to say that it is going to be retired post haste.

With Juliza dropping grains of rice, bits of cereal and pieces of fruit everywhere she goes, it’s awesome to be able to pull out the V6 on the spot and take care of it before it starts to build up. This is also true of other types of messes:  Like the packing peanut-mageddon that was left in my office after I opened a box the other day. When those things disintegrate into tiny pieces, they’re almost impossible to pick up. The V6 did it without breaking a sweat, before Juliza could pick up any of it.

What she does pick up, however, is the vacuum itself, because it really is lightweight.

She doesn’t quite have the coordination to actually use it yet, but you gotta learn ’em early, right?  Anyway, she enjoys pretending to vacuum, so much that the sound doesn’t even scare her any more.

I enjoy that it’s light enough to use in a variety of places, including one spot tht had not been vacuumed in months: Our staircase. The section head is small enough to fit on the steps, so I don’t even have to change the attachment. If I want to, though, the brush head is great for cleaning out the nooks and crannies of the sofa and the spots in the car where the bigger head can’t fit. Speaking of the car, this is another benefit of a cordless vacuum. Makes that job a lot easier.

Honestly, the Dyson V6 Slim makes a lot of jobs easier, which is kinda the point. I’m really pleased with its performance, and it’s definitely helping me keep the messes left in the wake of Hurricane Juliza in check. Can’t really ask for more than that.