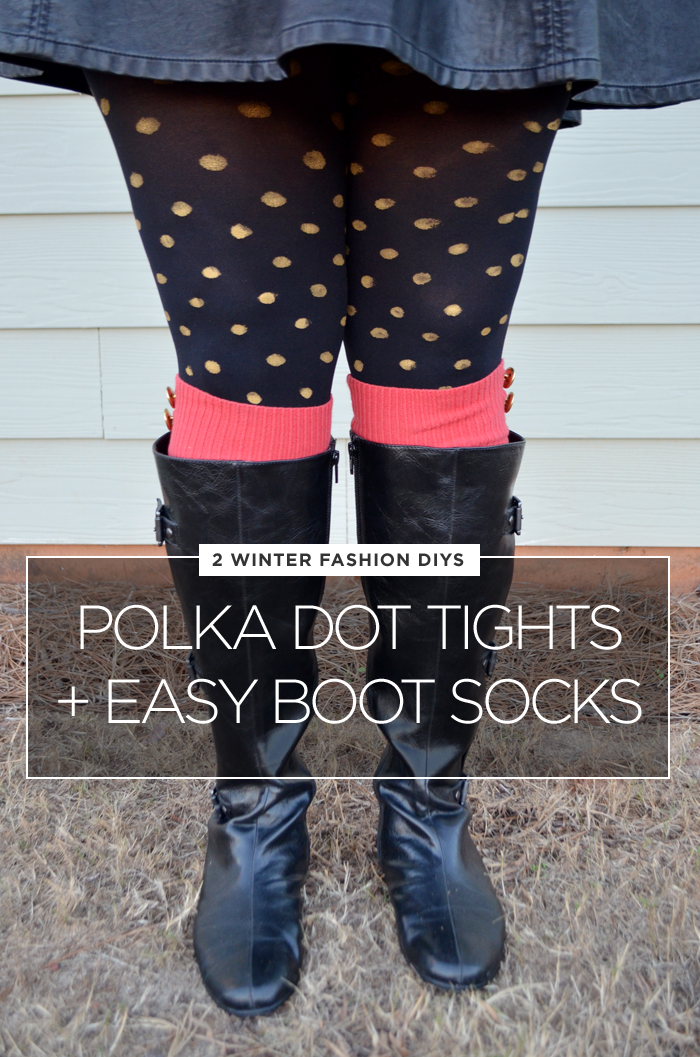 I admit it: When winter rolls around with its icy temperatures and frigid winds, I usually put the skirts and dresses away. Not because I don’t want to wear them, but because my Caribbean-born legs just can’t take the cold. This winter though, I’m fighting back. I have too many cute skirts and dresses in my closet to just give them up for a season. So when Walmart challenged me to share a winter craft, I knew I wanted to do something that would help me extend my wardrobe. So here are two simple, warm projects to tackle: DIY polka dot tights and DIY boot socks (also known as leg warmers). 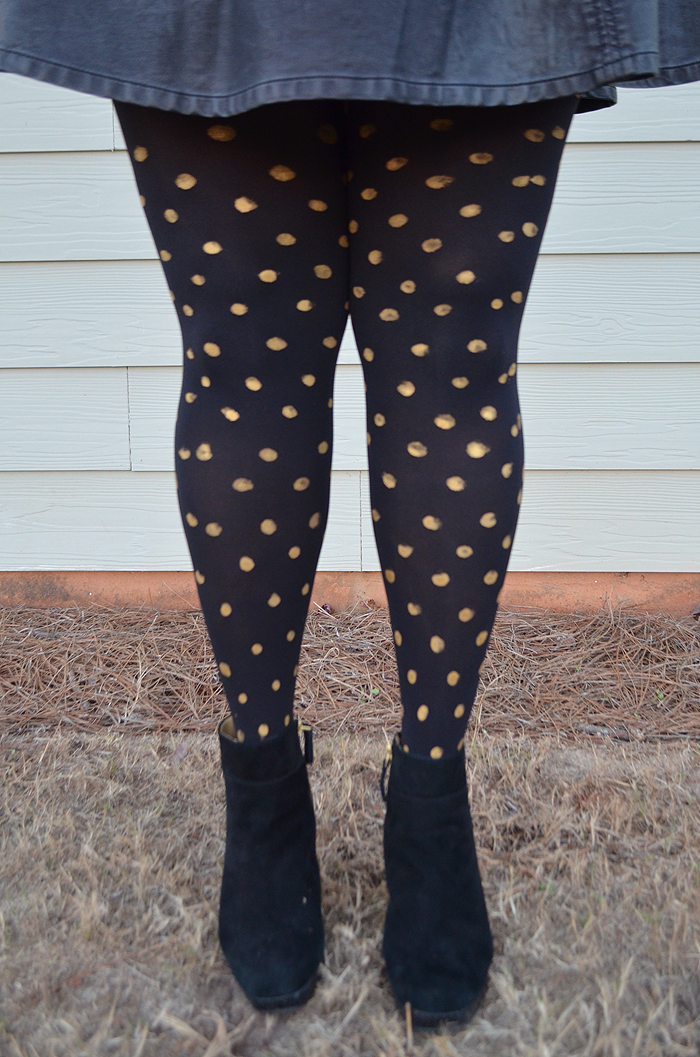 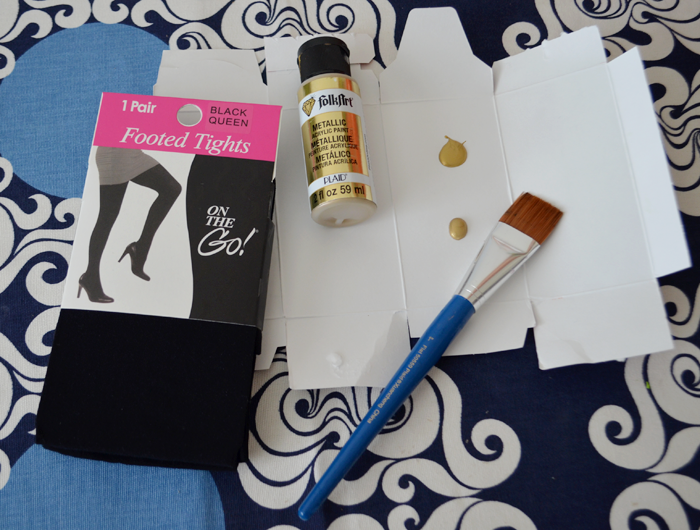 It’s so secret that the easiest way to keep wearing skirts during the winter is to add tights or leggings underneath. So what’s the problem? Well, finding plus size tights at all can be a challenge, but finding any with a cool pattern or even colors other than black feels almost impossible. So I decided to take the black tights I could find and dress them up myself. This is the kind of project I love: Simple, with a huge, stylish payoff at the end.

I grabbed some George tights from Walmart in the largest available size: Queen. They come with cardboard inside one of the legs, and you’ll want to leave it there. The polka dots are painted on, so the cardboard will stop the paint from seeping through the porous tights.

I initially planned to use a sponge to apply the polka dots, but the only one I could find was too large. Instead, I decided to use the tip of the paintbrush. Not the brush end, but the opposite tip. I had paintbrushes of a variety of diameters, but in the end, I decided that I wanted decently sized dots rather than pin-points, so I chose my brush accordingly.

You may want to do a few test dots on a piece of paper before you start on the tights. My pattern was simple. Start in row one with four dots, approximately an inch apart. In the second row, place dots between the ones on the first row. On the test paper, I just did three dots on the second line, but on the tights, I did 4 dots on every row. 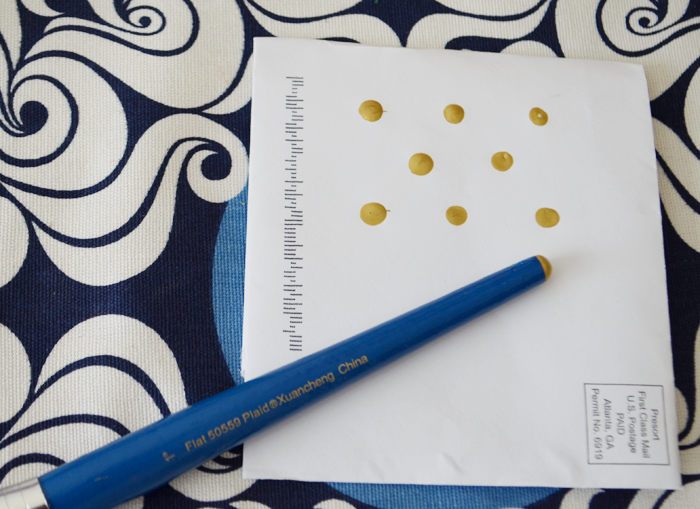 Once you’re comfortable with your dotting technique, move on to the tights. I started pretty high up, right in the crotch area so I’d have some practice in an area that won’t be seen when you’re wearing clothes. You don’t have to start that high if you prefer not to. 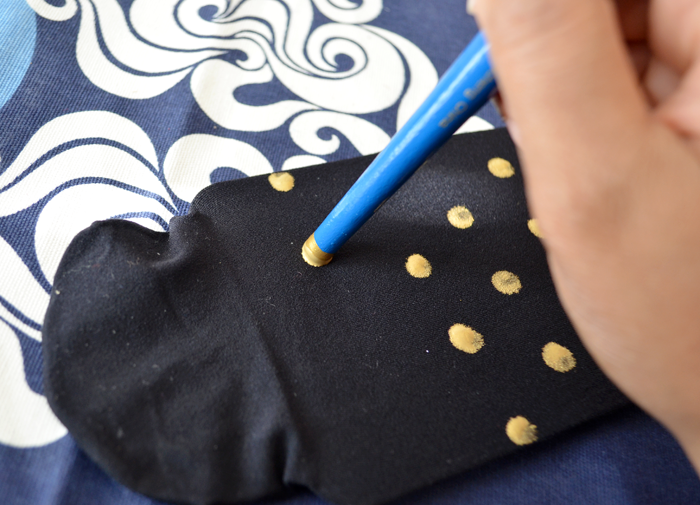 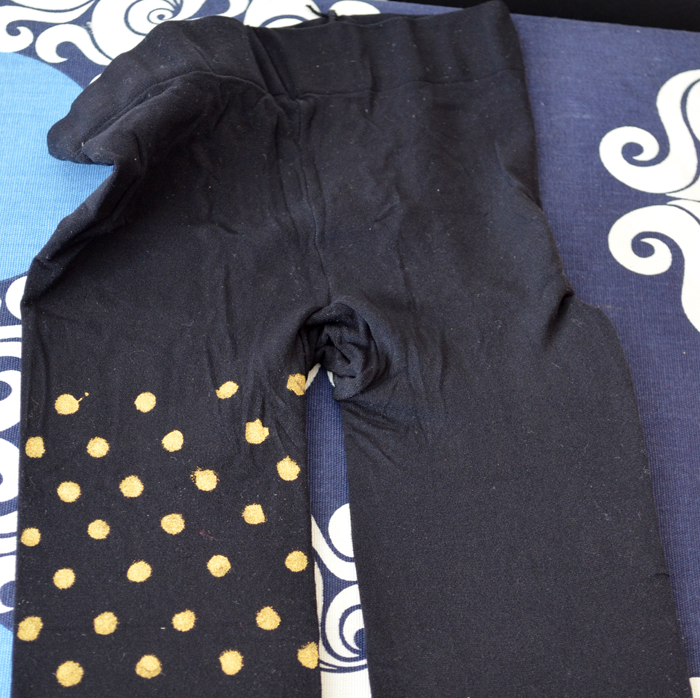 Simply follow the pattern until the whole length of the leg is covered. The dots don’t have to be perfect at all. In fact, imperfections lend to the handmade quality of it, in my opinion. Plus the dots will stretch when you put the tights on. Anyway, polka dot the front of both legs and let them dry. Then flip to the back and repeat the process. 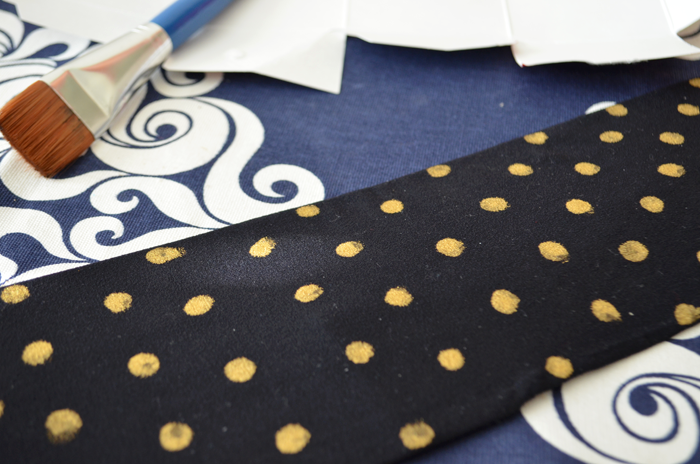 On the back, I did my best to line up the pattern. For example, if there was a dot right at the edge in front, I left space for the dot on the back. That way, there would be no dots right next to each other when worn. This was not foolproof, but I did pretty well lining it all up.

Let the paint dry well. The finished look here is, dare I say it, amazing! 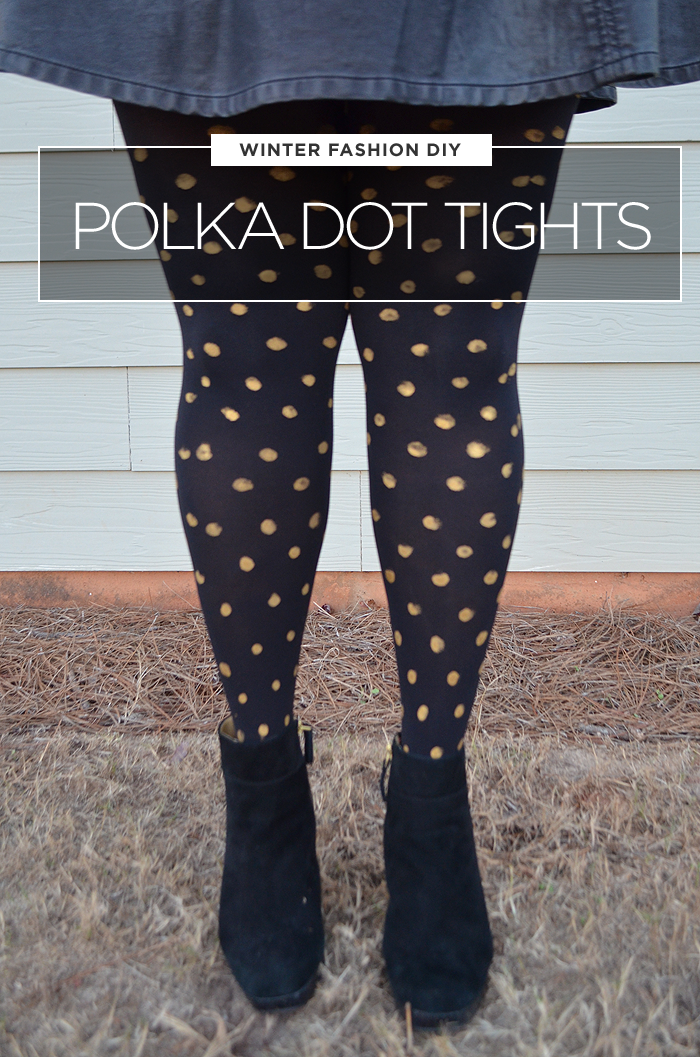 I have slim ankles and calves in comparison to my thighs, and that makes the dots stretch as they go higher up my leg. I actually love that look, and I want to do several more pairs in other colors. And there are a ton of other color options at Walmart.com. 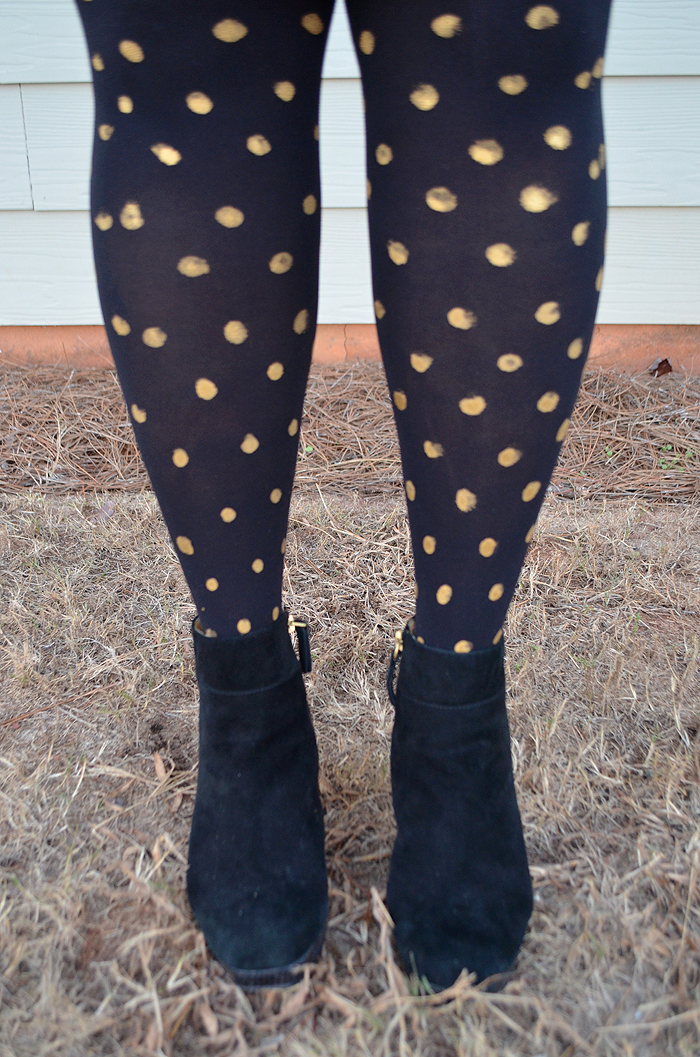 Talk about making a statement! I am so excited to rock these than in the next few days, I’ll share an outfit that I put together just for these tights! 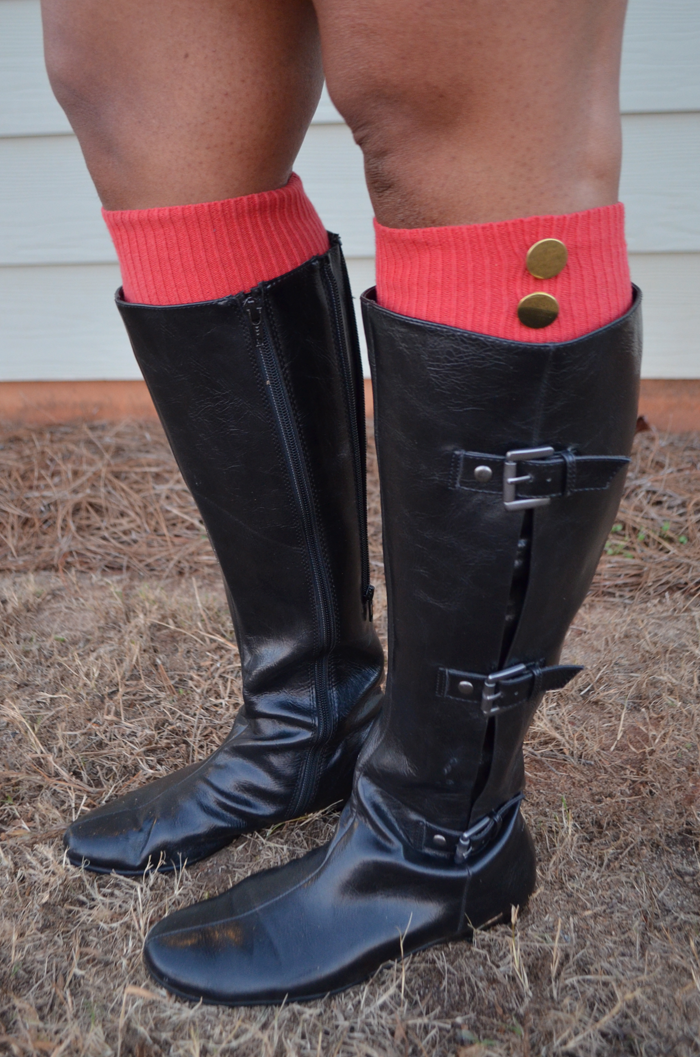 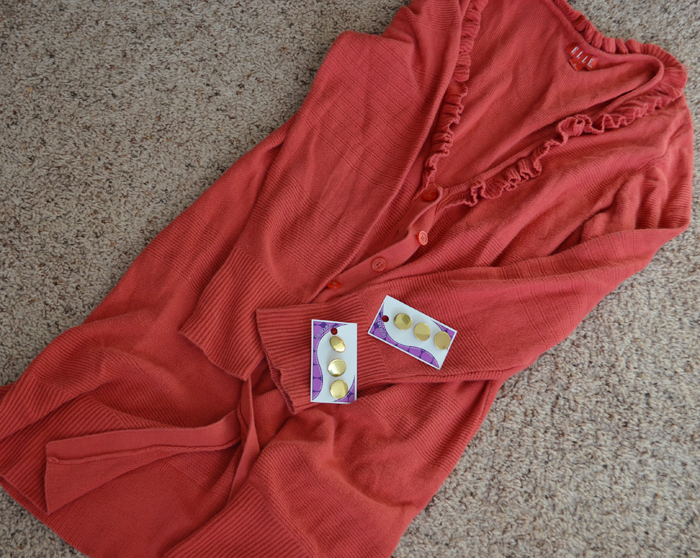 I have one pair of boots socks that I love, because they’re super cute, but also because of the added warmth factor. Realistically, leather boots can still sometimes leave my legs chilly. These solve that problem and they’re so easy to make that I plan to hit up Goodwill for a bunch more sweater so I can make more. If you don’t know how to knit, this project is a quick shortcut.

We all have a sweater in our closets that just doesn’t work anymore. The one I choose was a bit faded and had a couple of holes in the sleeves. Thankfully, those sleeves can still serve a purpose, warming my legs. To begin, before you cut, slide the sweater sleeve up over your calf to make sure the wrist whole will stretch enough to fit. I have large calves, so this step was important. 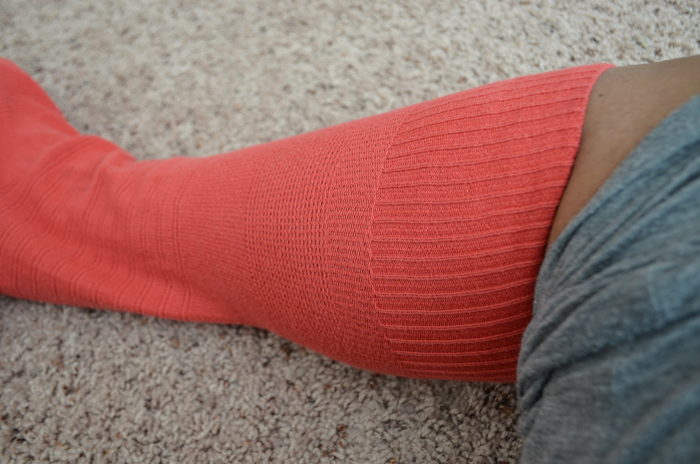 Choose the length you’d like for the socks. I personally wanted mine all the way to the ankle so I cut them close to the shoulder. Baby Juliza helped. Not really. But she did like the buttons on the sweater. 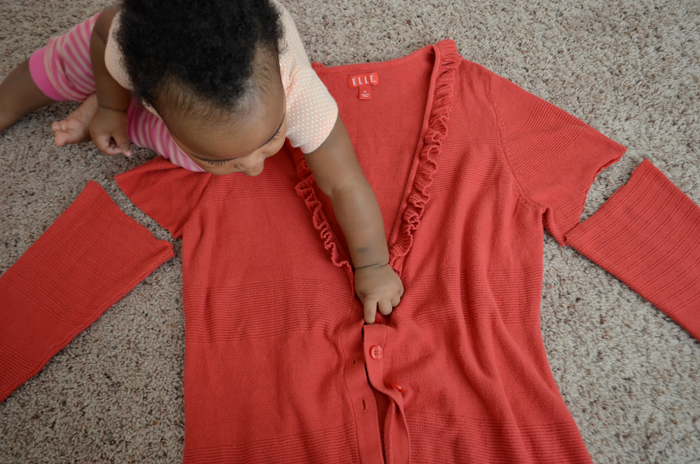 If you don’t want all that bulk inside your boots, you can definitely cut them shorter. My sweater had a cuff, so I likely could have cut just below the cuff, and that would’ve been enough to peek out of the top of my boots.

You can stop here if you just want simple socks. I wanted to add a little embellishment. I grabbed some simple gold buttons at Walmart to add to the sides. I laid the boot socks out so that the sleeve seams would be centered in the back. Then I found the center on one side and sewed two buttons on by hand. 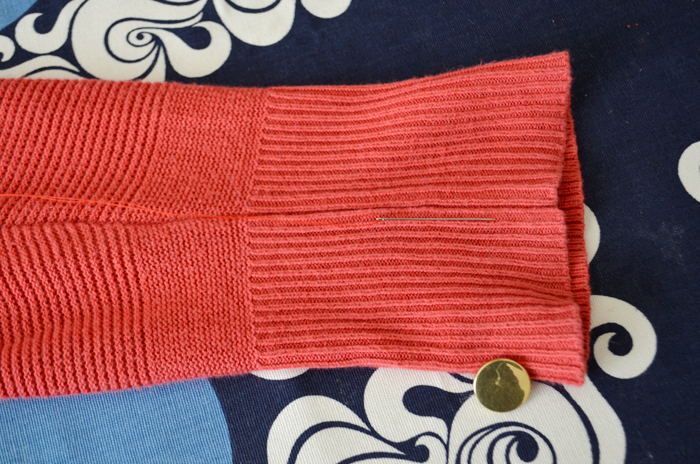 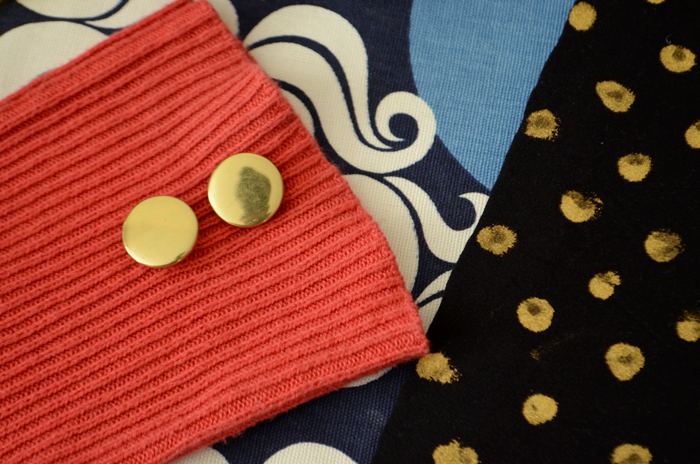 Crazy easy technique, but it made the boot socks feel so much more finished, especially when worn. Plus, you can customize them in a million ways: Add lace, rick-rack, tassels, pom poms, initials, and more. You’re only limited by your imagination.

I think I’m going to make some of these as Christmas gifts, because I know my sister and nieces would love them as much as I do.

You can wear the tights and boots socks separately, or you can wear them together. Personally, I think the layered look is sort of fabulous. 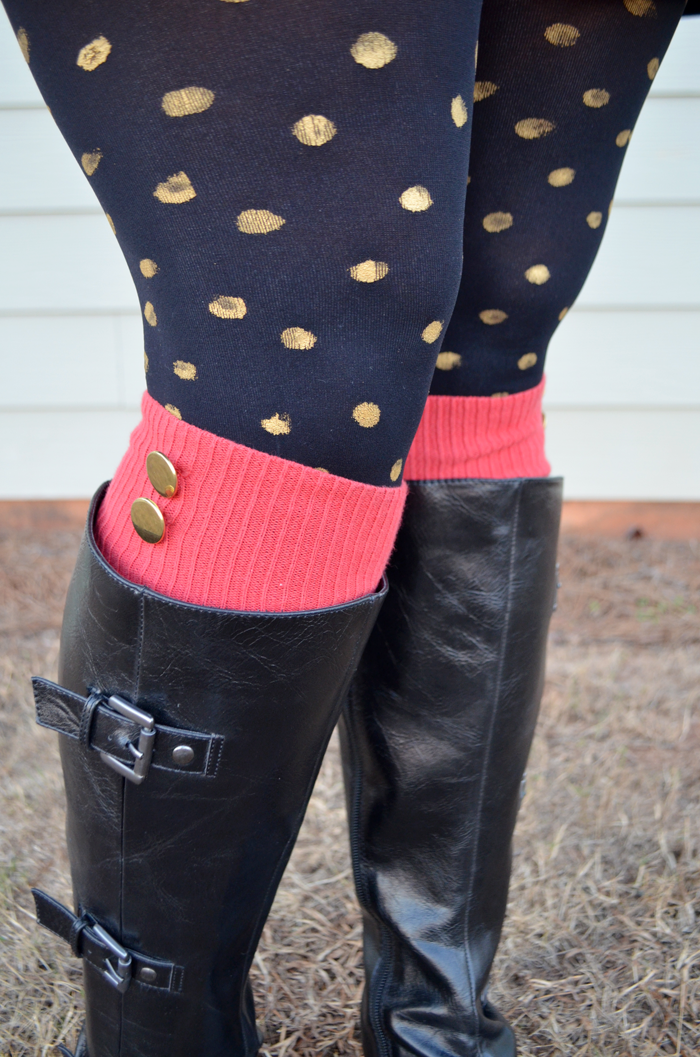 What about you? Would you wear polka dot tights or boot socks? Would you make them yourself?