Most people who know me would probably never guess that I have a guilty pleasure: Playing ALL of the games in the Grand Theft Auto franchise. Yes. I love those notoriously violent, over-the-top video games. Just call them my escape from the real world. Quick reality check, though: They are not family games, and definitely not games that kids should play, or even watch, if you’re a parent who’s trying to decide whether you can safely get a GTA game for your kid. Don’t do it. But, if you’re an adult gamer, you’ll love this franchise.

As a huge fangirl, I’d been eagerly anticipating the latest release in the series, GTA V. As in impatiently checking the Rockstar Games website for more than a year. So, when Walmart gave me an opportunity to write about whatever I wanted this fall, a review of this much anticipated game was the only natural choice. And why I was in store on the day it released to grab my copy. (aff) 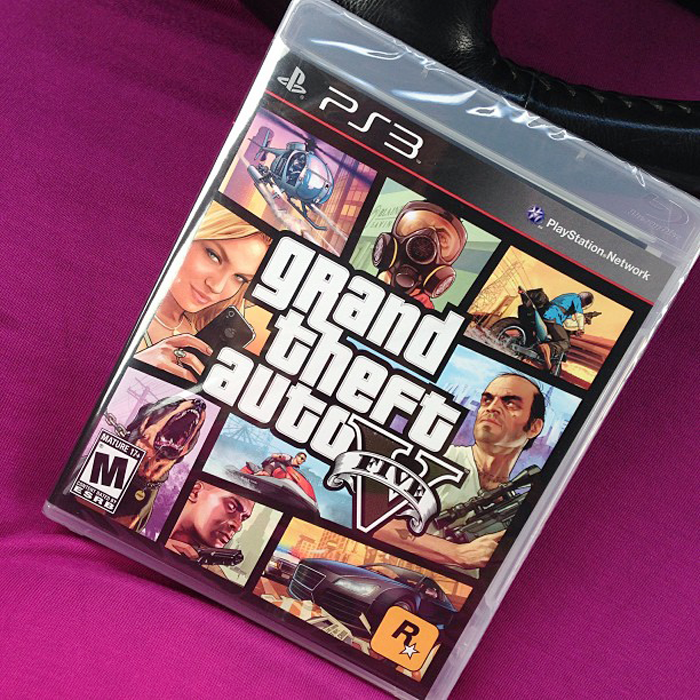 Above all else, what makes the GTA franchise great is the stories and the writing. Yes, the games are ridiculous and violent and full of criminal activity that no sane person would ever attempt. But unlike so many games that have tried to imitate this model (I’m looking at you, Saints Row), the stories are typically believable and follow a logical progression. The dialogue feels like watching real people having conversations, rather than some writer’s idea of what real conversations look like. Because of this, the games are infinitely entertaining. It’s almost as much fun to watch story lines and missions unfold as it is to play them. And even if you don’t do the missions (though I don’t recommend that, because they are really awesome), there is so much to do in the GTA world that it’s almost impossible to be bored.

All of those things are still true in GTA V, and in fact, have improved exponentially. The story is the best yet, in my opinion â€” and I’ve played EVERY GTA game. It is told from the perspective of three protagonists this time rather than just one. The interactions between the characters and their backstories make sense and really drive the game. What’s more, you get to play as all three characters throughout the game â€” sometimes on missions for a single character, and sometimes in interactive missions where you’ll have to switch between them in order to pass. 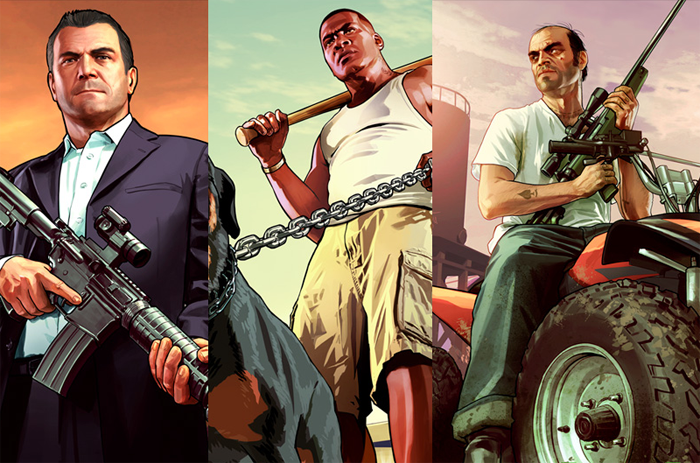 The three protagonists are shown above in order of when you meet them: Michael, Franklin and Trevor.

Michael is a former criminal suffering through life in a mansion nearÂ Vinewood with his wife and two superficial, lazy and ungrateful kids. He spends all day getting drunk next to his pool and reliving the good old days when he was actively committing crimes. Franklin is an opportunistic young hustler who is trying to make money without getting his hands too dirty and meets Michael by chance on a job for his shady employer. His hands get a whole lot dirtier as a result. Trevor is Michael’s meth-dealing former partner, and the man is certifiably insane. Without giving away too much, let’s just say Trevor and Michael have lost track of each other over the years, and getting reacquainted isn’t pretty.

The richness and depth of each character is what makes the game so interesting. That you can switch between them whenever you’d like (when not playing a mission) makes it pretty much impossible to get bored or frustrated with the game. Can’t pass one of Michael’s missions? Switch to Franklin or Trevor. Or just do what you’ve been able to do in every GTA game and go wreak havoc throughout the city with any of the three characters.

Each player has missions only he can do, and each starts with a specific set of skills that you can improve throughout the game. For example, Franklin is a pretty great driver, and Trevor is an excellent pilot, but Franklin can barely keep a helicopter in the air. However, the more you do each activity, the better their skills will get. Each character also has a special ability that you can activate during tough situations. I won’t say what they are, but let’s just say these abilities can come in handy and give you an upper hand when you really need it.

What else is new?

In previous GTA games, the entire point of the missions was to make as much money as possible while building your criminal empire. That is definitely true in this case, but a lot of the missions in this game result in no money earned at all, because they involve situations the characters have no choice but to handle, whether they pay or not. But the missions that DO pay, pay well.

There’s also the added element of choice. During quite a few missions, you are required to select a crew to do a job with you. You can choose each person based on his or her skill level, but the folks who are competent are also expensive, and they’ll affect your final payout because they get a bigger cut. But the crew members you house can also affect the outcome of the mission, so you’ll want to make sure they’re capable. There are a few smaller missions during which you can choose the outcome as well, and the final storyline mission involves a huge choice to be made on your part that absolutely affects the game. That’s all I’ll say. *evil laugh* 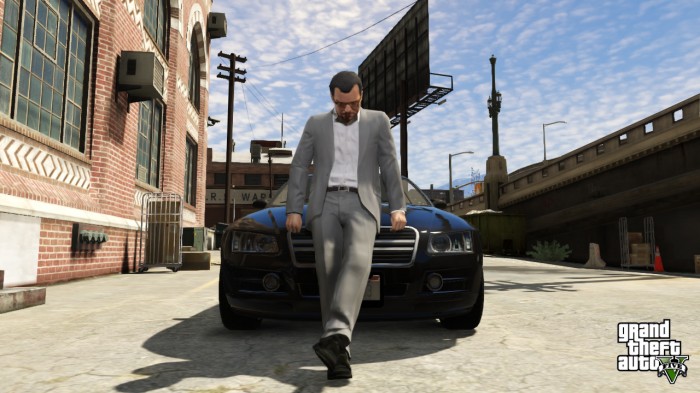 Another new addition that has made mission play worlds better and much less frustrating is on-mission autosave. In previous GTA games, if you failed a mission, no matter how close to the end, you had to start over. As in from the beginning. As you can imagine, that got really annoying during long, tough missions. This time around, there are invisible checkpoints throughout a mission, so if you fail, but choose to continue, you start over from the last checkpoint rather than the beginning of the mission. If you get frustrated and quit the mission altogether, you will have to start over, but at least you’ll have the option to pick up from a point shortly before you failed. This alone made playing missions much more satisfying, as I could complete them in a single session rather than wanting to throw my Playstation against a wall after doing a mission over and over again, to no avail.

Also, anyone who has ever played a GTA game knows about the elusive 100% completion. This means you have completed all the storyline missions along with any side missions, bought all properties you can buy, and that you’ve found anything in the game that requires finding (packages, pigeons, etc.) Well, Rockstar Games made this edition more difficult, but also more replayable, because now, you have to do more than just pass a mission. You have to meet certain criteria in order to pass it at 100% with a gold rating. For example, getting gold might require a certain number of headshots during a shootout, or that you complete the mission in a certain amount of time or without a scratch on your car. Because you never know the criteria for 100% without playing, and passing, a mission at least one time, it’s unlikely you’ll do it on the first try. Which means you’ll be compelled to play through it again to improve your performance.

To give you a small idea of why you can spend hours and hours on end playing this game and why 100% is likely going to be difficult to achieve, here are just some of things you can do to pass the time in the open world of Los Santos and the neighboring Blaine County, all set in the state of San Andreas:

I know I’m probably forgetting a lot of the things you can do. And I haven’t even explored online multiplayer yet. My point is that although I have personally completed the storyline missions, but I’m still finding things to occupy my time in the game. I doubt I’ll ever obtain 100% completion, but that’s perfectly fine with me.

I’ve just been thoroughly enjoying the fact that the game has lived up to the hype, and I’ve got my husband hooked on it too: 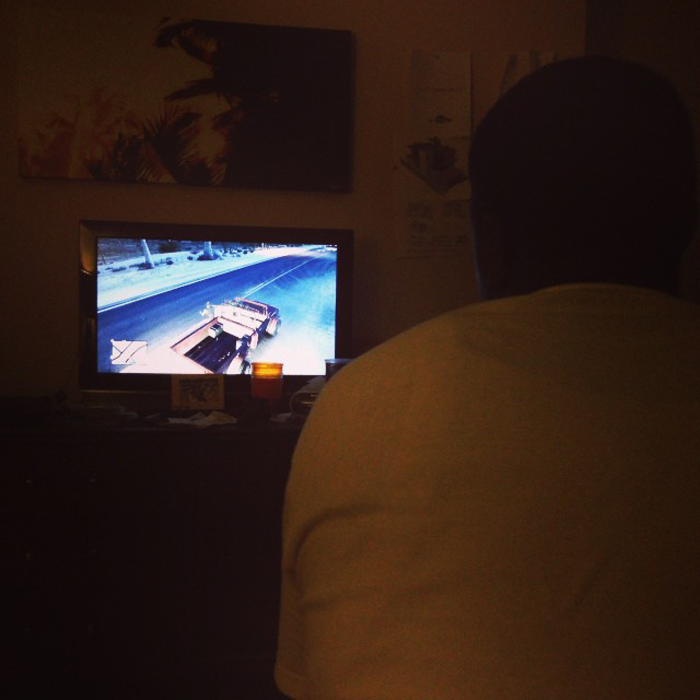 Because it needs to be said again, I will reiterate: Speaking as a mother, this is NOT a game for kids. If you need further evidence after all I’ve said above, I have one word: Strippers. Strippers who will take the playable characters home with them if they “like” them enough â€” for adult time. After private dances that leave little to the imagination. You get the idea. Don’t let your young kids play this. Think of this as the Breaking Bad of video games. If you wouldn’t let your kids watch that show, you shouldn’t let them play this game. Only you can decide if your older teens can handle the content.

But adults? If you love open world, sandbox games, or you love great writing and are not easily offended, you will absolutely love GTA V.Â Game on.