Given the state of television these days, there just aren’t a lot of movies my family and I can enjoy together. Most of the options are either mindless drivel directed at kids with very little redeeming value, or full of so much adult content that I have to either ban my 8-year-old from watching altogether, or I have to talk through the entire film explaining what NOT to do as a result of the example presented. Don’t get me wrong â€”Â some of the latter lessons are useful, but after a while, the negative messages are just too much.

Walmart’s goal is to provide entertainment that the entire family can enjoy by sponsoring quality films. They struck gold with “The Watsons Go To Birmingham,” based on the popular book by the same name.

The story is about the Watson family’s decision to leave Flint, Michigan to visit Birmingham, Alabama, the mother’s hometown, in 1963 during the height of the Civil Rights Movement. As you might imagine, children who were born and raised in the relatively integrated north had NO idea what was awaiting them in the segregated South.

But I’ll start from the beginning. The film stars Anika Noni Rose (also known as the voice of Disney’s Princess Tiana) as Wilona Watson and Wood Harris as her husband, Daniel. It also stars Skai Jackson of Disney’s Jesse as 8-year-old Joetta, and Harrison Knight as 15-year-old Byron and Bryce Clyde Jenkins as nerdy Kenny.

The family’s decision to head South was spurred by the Byron’s behavior. He had turned into quite the juvenile delinquent, and his parents were really worried about where his youthful misdeeds would lead him. So in his mom’s infinite wisdom, she realized he could really use the strict and effective hand of her OWN mother, who was back home in Birmingham, Alabama.

I won’t go into too much detail because I don’t want to spoil it, but I will say that the entire trip provided a real world education in race and cultural relations. The boys’ first experience being told they couldn’t sit at the counter of a whites-only restaurant was uncomfortable, to say the least. They quickly realized that the news stories they’d watched on TV in Michigan about the fight for civil rights were much more than just stories. They were real events in which even kids their age got involved, at the risk of their own safety and the safety of everyone they loved. 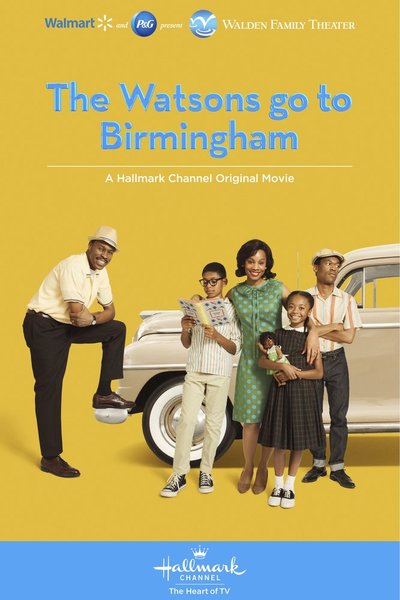 All of these things made the movie incredibly educational for my kids. My stepson was actually reading the book in school in the weeks before the movie aired, so it really came to life for him. My daughter had a lot of questions that I was only too happy to answer, and seeing this heavy content from the perspective of kids who actually had to live it made it really relatable.

But as much hard truth as the movie contained, there were also lots of threads of inspiration: The grandmother’s refusal to let racism drive her away from her home. The community’s will to go on in spite of a spate of bombings in places frequented by people of color. Kids learning that the world is much bigger than them. A son learning that his energy is better served working for the greater good than getting into trouble. A family and community truly coming together when it counted.

The movie culminated in a heavy scene reminiscent of a bombing that students of Civil Rights will know all too well. I’ll leave it at that.

All told, we genuinely enjoyed the Watsons and would absolutely watch it again to pluck additional messages from it. I also live tweeted during the premiere, and this happened:

"@jennaepetersen #Watsons is making me want to go shopping 4some vintage clothes ANR &all the ladies look amazing!" Thx 2 @JohnettaBoone!

Yes. Anika Noni Rose retweeted me and responded. Night. Made.

If you missed the movie when it aired on the Hallmark channel, you can get the DVD at Walmart. The DVD includes a 135-page educational manual about the Civil Rights Movement that has already been adopted by Birmingham Public Schools and is no doubt a great addendum to what your kids are already learning. We’re going to get the DVD in large part so we can get the book.

Did you get a chance to watch The Watsons? What did you think of it?

DISCLOSURE: As a participant in theÂ Walmart MomsÂ Program, Iâ€™ve received compensation for my time and efforts in creating this post. All thoughts and opinions are my own.