Say what you will about Walmart, but I am impressed to see that their sustainability goals were more than just talking points that they never actually intended to accomplish. Not only are they steadily approaching those goals â€” the company keeps itself publicly accountable by holding Sustainability Milestone Meetings every few months. I’m happy to report that the latest meeting, held last week, did not disappoint. You can watch it for yourself here. In fact, it confirmed something that I have been saying for years.

Early in the meeting, Carter Roberts, the U.S. president of the World Wildlife Fund, had a chance to speak. If you’re thinking that a partnership between the WWF and Walmart seems ill-conceived, think again. The organization started off working to save tigers, polar bears and pandas, but they soon realized that they had to expand their reach to big business if they were going to make a real impact. I have long believed that it is true. Because what good is it for an activist or a nonprofit organization to work exclusively with companies that already have sustainability built into their business models? That’s just preaching to the choir. The larger impact can be made by working with companies like Walmart and other retail and business giants who have a long way to go and need direction and advice from people and organizations who know what they’re talking about.

A second update in the meeting made a huge impact on me. Walmart is working closely with their team in Brazil on sustainability and social responsibility initiatives there. Because whether you realize it or not, the supply chain for a company like Walmart goes far beyond the borders of this U.S. and extends far into the countries where a lot of the supply comes from.

Walmart started a recycling co-op in Brazil that not only has resulted in 2 tons of debris and waste being diverted each month, but it also employs 72 people, many of whom were living on the streets, scavenging for whatever they could find to sell, and therefore to survive. These kinds of programs are a reminder that what may seem small to us can have a huge impact not just on the environment, but on communities and people. Because sustainability is about more than just products. Its also about social responsibility. 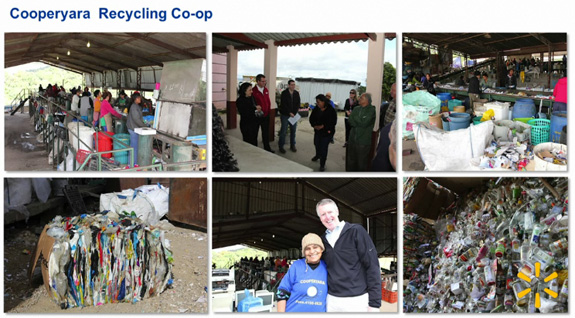 Another big part of Walmart’s Brazilian operation is dedicated to ensuring the sustainability of the beef the company purchases. Because, let’s face it. People are going to eat beef. According to Camilla Valverde, sustainability director of Walmart Brazil, 17% of the Amazon has already been deforested, and beef production accounts for more than 60% of that deforestation. Yes. Fragile rainforest is often clearcut to make way for beef production. Well, Walmart has instituted a monitoring system that traces beef all the way back to the farm and alerts Walmart’s internal buyers about the deforestation risk of any beef they buy.

There is also a large push for Walmart to learn more about the sources of their beef in general. Several executives high up in the Walmart food chain visited a family ranch in Colorado that is also a beef supplier to learn about their holistic practices, how and where they feed their cows, etc. There was no specific mention of whether there is a push to move toward more grass-fed and organic beef, but I’m genuinely hoping that this is the case.

More than anything, I’m looking forward to the launch of the Walmart Sustainability Index. I’ve written about it before, if you’re not sure what it is. Briefly, its a system the company developed to rate every product on its sustainability, all the way from the source to production to the finished product. While its not yet complete, I love the idea that EVERY product will be scored and that this information will be readily available to the consumer. I truly believe that companies will start working toward more sustainable production once they realize that their products will be on the shelf right next to competing products that could have a much better sustainability grade.

In addition, the goal is that, internally, Walmart’s buyers will begin to use the sustainability index to make decisions about what products to purchase. Which eventually will lead to more better, more environmentally friendly choices for the consumer.

And if you know anything about Walmart, you know that the goal is to do this while maintaining the same affordability that customers have come to expect from them. At the end of the day, Walmart’s belief is that it shouldn’t cost consumers more just because they want to buy healthy, sustainable products for their families.

In my time working with Walmart, I’ve already seen the store move from very few eco-friendly product options on shelves to carrying a number of well known green product lines, from Burt’s Bees to Toms of Maine, Seventh Generation, Mrs. Meyers and even Shea Moisture. I hope this is a trend that continues, and that this trend encourages makers of “traditional” products to reconsider what they’re made of and how they are made.

Watch the sustainability milestone meeting and let me know what you think!

Disclosure: I am a member of the Walmart Moms program. I was provided with compensation for my time and effort in sharing my impressions of the Sustainability Milestone Meeting with you. Participation is voluntary and as usual, all opinions are my own.