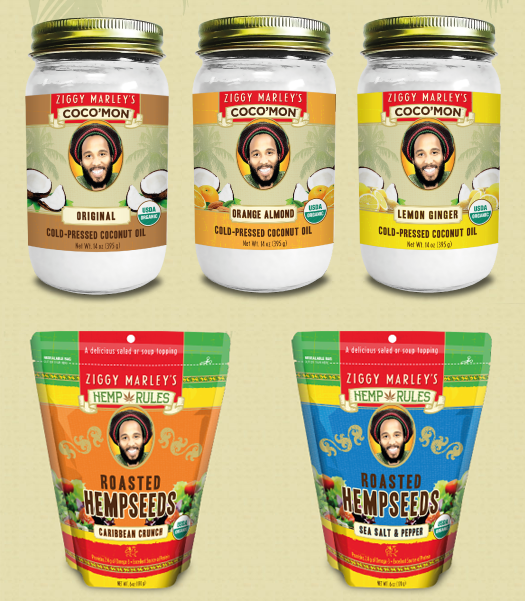 I’ve always loved the Marley family and their homegrown, sustainable, Caribbean values. But then one of them will go and do something that takes my admiration a step further. This time it’s Bob Marley’s eldest son, Ziggy, who is speaking out about genetically modified food. In fact, Ziggy is taking it one step further. He has started a line of organic food products, aptly branded as Ziggy Marley Organics.

The new product line is small, with just two products at the moment: Coco’Mon organic flavored coconut oils and Hemp Rules roasted hemp seeds. However, he is planning on releasing couple of pain relief products that contain CBDÂ 10%. I think what he is doing is admirable, and I love his thoughts about GMO food:

He also made a poignant modern day comparison: When we watch movies on televisions rather than the big screen, we are first subjected to a message: “This film has been modified from its original version. It has been formatted to fit this screen.” Isn’t it crazy that we are forewarned that movies have been modified, but we have to fight government and the food industry to find out that our FOOD has been modified?

Ziggy is a huge supporter of the Just Label It campaign, which, as its name implies, is lobbying for the labeling of all genetically modified food products. Check out this video to learn more:

In the meantime, there are some things you can do:

In an interview with The Root, Ziggy spoke had some strong words in support of fair food labeling.

The important question is, do people have a right to know what they’re putting into their bodies? If the answer is yes, then everything should be clear and transparent. If people don’t have a right to know, then put nothing on it â€” no calories, no cholesterol, nothing. But I know we have a right, and that right is important to me. If food is labeled, some people might choose to eat stuff that’s genetically modified. They might decide they love it. But give us a choice. The big thing here is that the people are the lab rats and the guinea pigs.

I couldn’t have said it better myself. He also brought up another point in the interview that really struck me. Growing up in the islands where a lot of our food comes from local farms, individual backyard growers and the ocean, I never realized how good I had it.Â  Of course, we did buy some pre-packaged and processed food from the grocery store, but the food culture in the Caribbean is completely different than it is in the states, in my experience. Home cooking with fresh, often local, ingredients is a big deal. In Jamaica, Ziggy grew up with the same experience (a few decades before me), and that perspective has driven a lot of his passion about food today.

Lord knows I have a long way to go with changing the way I eat, but I think some of it has to start at the top of the food chain, with food manufacturers taking responsibility for what’s in their products.Â  And they can start, at the very least, by telling us what’s in them and whether their properties come from nature or from a group of scientists in a lab.

Read the entire interview at The Root, and support organics and labeling of GMOs!