Being a Walmart Mom means that I am encouraged to try new products and experiences that I may not have tried otherwise. This week, that meant attempting to make a grilled pizza. The idea seemed easy enough, particularly because pre-made, frozen pizza dough is readily available. You know â€” except for the fact that we don’t own a grill.

We USED to have a grill, when we lived in a ground floor apartment. Georgia fire laws dictate that we can’t grill on our patio. When we lived on the ground floor, we stored our large, propane grill on the patio because it was relatively easy to move it outside whenever we wanted to use it. But when we moved to a third floor apartment, the prospect of taking the grill down 3 flights of stairs and back up again every time we want to cook out suddenly didn’t seem so appealing.

So why in the world, then, was I determined to try making grilled pizza?

In retrospect, I don’t know what made me think this would be successful, but here’s what happened.

My husband has recently started eating steak after years of eating only poultry and seafood. When this happened, he bought a griddle/grill that we can simply put on top of a burner on our gas stove. And I figured if it worked for steak, it would work for pizza. 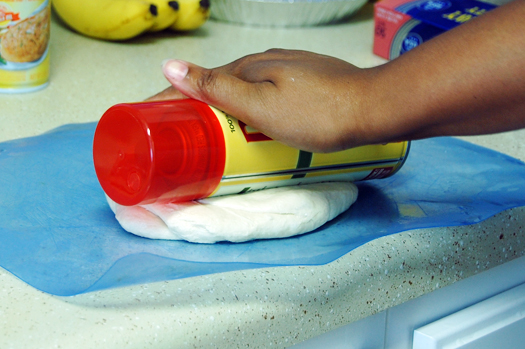 I wasn’t entirely prepared for the process. I didn’t have a cookie sheet to help in preparation, so I used a cutting board. I also didn’t have a rolling pin to roll out the dough, so I used a can of cooking spray. Laugh if you must, but it worked. Sort of.

I cut up my chosen toppings â€” green peppers and red onions â€” and got my cheese ready. Per the instructions of the recipe I found at SimplyRecipes, I put the rolled dough on the hot grill to let one side cook slightly. The problem? My dough was super thick, and getting the dough off the cutting board and onto the grill made it all misshapen. And then of course there’s the obvious challenge â€” a stove-top grill doesn’t have a cover you can close. Whoops! 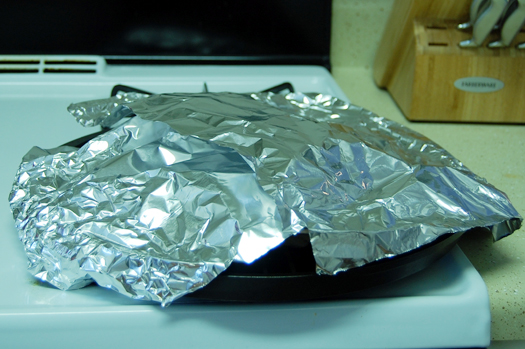 I covered it with foil the best I could to trap some of the heat. But that made it tough to check whether the dough was cooking, and by the time I got all the foil off, the dough was overcooked on one side. But it was still salvageable, so I moved on. 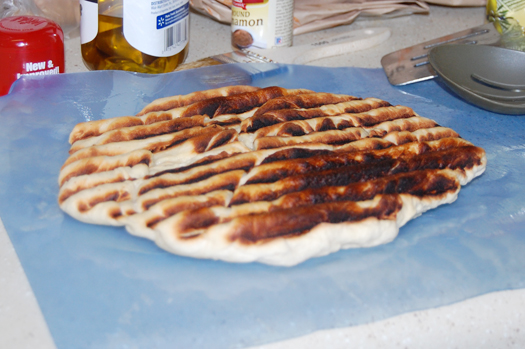 I flipped the dough over so I could put my sauce and toppings on the cooked side. I brushed it with some olive oil, spread a single ladle of sauce on top, and my daughter and I added a thin layer of cheese. Or at least I thought it was thin at the time. I realized how heavy-handed we’d been when it was time to melt the cheese. Anyway, we added the veggies and some more cheese on top.Â  Then, per the recipe, I brushed the grill with more olive oil and put the assembled pie on it.

I knew I needed to trap the heat if I had any hope whatsoever of making the cheese melt. So I went back to my foil “hat.” Yeah. That didn’t work. Not even a little. The dough grilled, but the cheese wasn’t even beginning to melt. So I cheated… 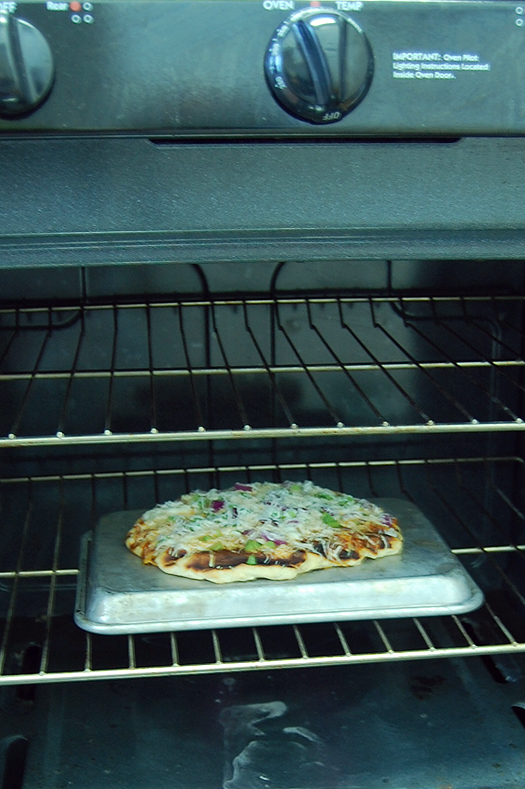 I wound up having to stick the whole pie in the oven to melt the cheese. And the whole thing got overcooked. This was the result: 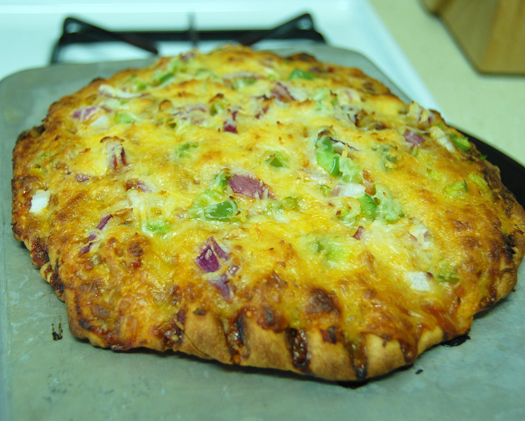 It wouldn’t win any best-looking pizza contests, but I figured it couldn’t be terrible. Little did I realize that the crust was about as thick as a hockey puck, and almost as hard. OK…that’s an overexaggeration. The crust really wasn’t all that hard, except on the surface in a few places. But it WAS super thick. 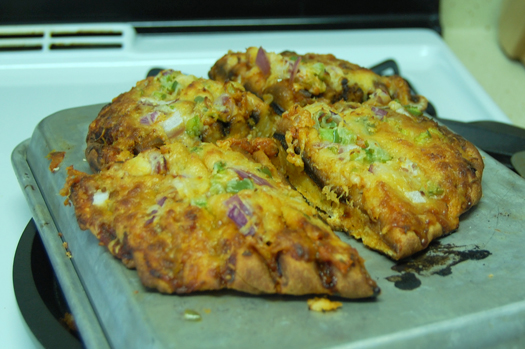 In the end, only my sister-in-law and I were adventurous enough to actually eat a slice. My daughter took one bite and wouldn’t touch any more.

So honestly, my attempt at grilled pizza was a ginormic (yes, I made up that word) FAIL. And worse than that, we had company over. I told myself that if the grilled pizza went well, I’d make two more so there would be enough for everyone. Needless to say, I didn’t try again.

But since it was my first time ever trying to make pizza at home, I’ll give myself a pass. And next time, I’ll just bake it in the oven, use a ready-made crust instead of dough…or just call Pizza Hut. I’m afraid I did the latter this time. I had too many mouths to feed to take a chance!

Disclosure: I am a member of the Walmart Moms program. I was provided with compensation for my time and effort in sharing my experience making grilled pizza. Participation is voluntary and as usual, all opinions are my own. If you want to read about some recipes that actually went WELL, check out Sheena at Sophistishe (hers looks DELICIOUS!), Tina at Mommy’s Kitchen, or Linsey at LillePunkin.