As Mother’s Day nears, it can be easy for those of us who have relatively happy comfortable lives to forget the mothers around the world who are not so lucky. Here’s a sobering fact: Even in this day and age, a woman dies every 90 seconds from complications of pregnancy. Worse, 90% of those deaths are preventable.

Let that sink in for a second. Most of the mother’s I know gave birth in a hospital, birthing center, or their own home (usually by choice). Few of us ever seriously consider the idea that we could die as a result of giving birth. In fact, I’d venture to say that unless we have experienced birth complications or know someone who has, most of us go into labor with complete faith in the health system and the fact that we’ll be walking out a few days later with a beautiful, bouncing baby.

Some women don’t have it so easy. 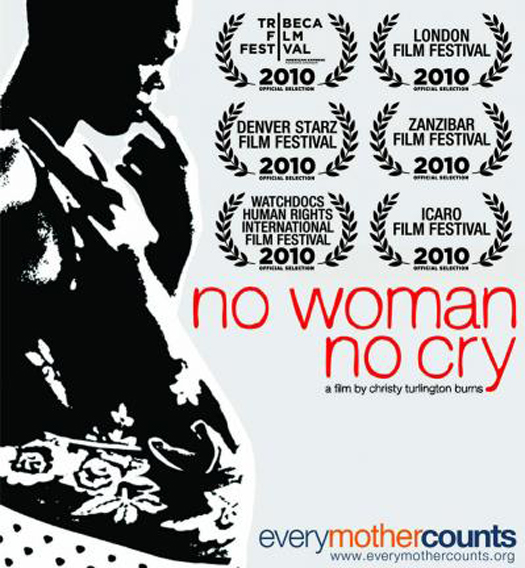 One organization is doing all it can to reduce the risk to women the world over. Every Mother Counts is an advocacy campaign to increase education and support for the health of mothers and children. More importantly, they are encouraging people like you and I to take action and make a difference. They are also behind a film made to raise awareness about the issue. Here’s a trailer from “No Woman, No Cry,” a documentary by Christy Turlington Burns.

In the film, Burns shares the stories of at-risk pregnant women throughout the world, including a remote Maasai tribe in Tanzania, a slum of Bangladesh, a post-abortion care ward in Guatemala, and a prenatal clinic in the United States.

It will air on the OWN: The Oprah Winfrey Network for Motherâ€™s Day: May 7th at 9:30 p.m. EST and May 8th at 1 p.m. EST. Find out how you can host a viewing party, or find out about other ways you can take action. We owe it to every mother to be able to regard her pregnancy with joy and wonder rather than fear.