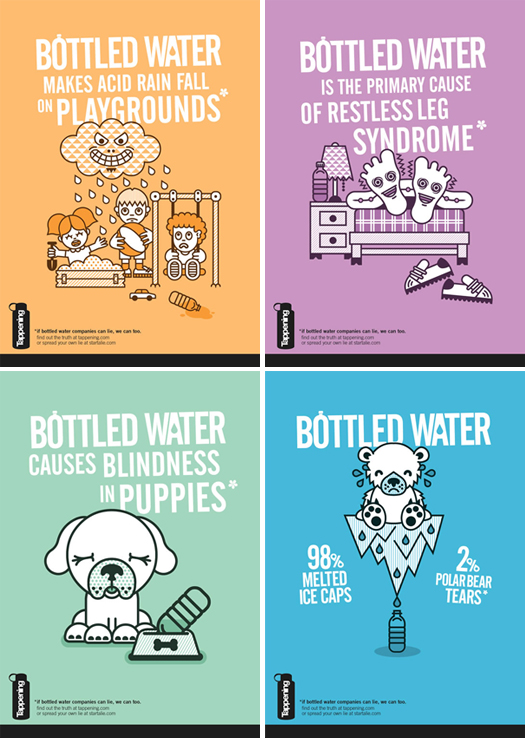 For more than a year, it’s been an uphill battle trying to convince some of my friends and family members that bottled water is really nothing more than supremely overpriced tap water. Some of them still insist it tastes better and is better for them, which is what the bottled water industry wants them to think.

I generally don’t regress to my lower self to win a fight, but sometimes you have to fight fire with fire. Bottled water companies would have us believe that their product comes from pristine mountain streams that have never been contaminated by man, and that it really is healthier to consume. Some companies even have the nerve to market their products as “green” because they make their bottles with â€” get this â€” a whopping 30% less plastic (see Nestle’s so-called “Eco-Shape” bottles). No wonder so many people think “green” is nothing more than a marketing gimmick!

Given the lack of truth in advertising from water companies, the team at Tappening.com, which has been fighting the battle against bottled water for a few years, is encouraging consumers to make up their own lies about bottled water with the Start a Lie campaign and website. You can see four of those lies in the images above:

But consumers can submit their own versions. Among my favorite user-submitted lies?

There are many, many others that are equally as hilarious. As silly as these lies are, the point is that we shouldn’t fall for the propaganda the bottled water industry would have us believe any more than people should take these made-up side effects seriously.

If you haven’t yet, get yourself a reusable water bottle

for your tap. Really. It’s a good idea.