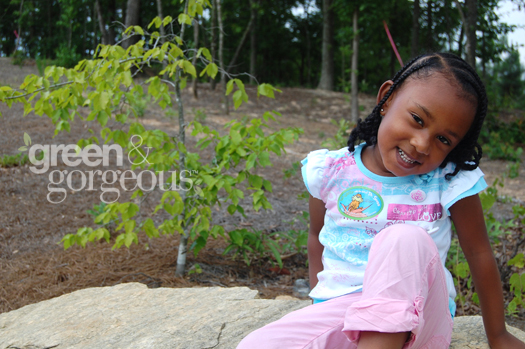 On more than one occasion, I have heard and read experts saying that having children, and therefore continuing to populate the world, has a greater impact on the environment than any other action. The long and short: These people believe that that having kids is bad for the planet and that anyone aiming to be environmentally responsible should not have kids.

To rebut this argument, I’d like to burst into a tirade of four-letter words, but I realize that would be counterproductive and make me look like a moron rather than the eco-savvy mom I am. I will try to explain my position without getting too angry. A post about this topic over at Inhabitots a few weeks ago really set me off, though I completely agree with that author.

I understand the basic idea behind this conclusion â€” that people, in the course of a lifetime, have a huge environmental footprint, and that reducing the population would thereby reduce said footprint. But the idea that children are bad for the environment radically oversimplifies the reasons this planet is in the dire condition that it is in. The problem ISN’T just having too many kids, especially considering that birth rates in developed nations are much lower than elsewhere in the world. The problem is raising kids who have no regard for the environment and therefore continue a cycle of overconsumption. In other words, we need to encourage environmentally responsible parenting rather than an eventual end to the human race, which is what would happen if we stop reproducing.

I used to be one of those people who had no clue what my actions were doing to the Earth. But having my daughter was one of the reasons I set out to learn about green living and try to do better. In fact, my primary motivation for what I do is preserving the planet for future generations â€” generations that wouldn’t exist if the proponents of “voluntary human extinction” had their way. Moreover, if the human race ceased to exist, consider the condition in which we would leave the planet. Continuing the way we are now, we would leave the Earth a mess of abandoned buildings and non-biodegradable, toxic “stuff a-la Disney’s Wall-E â€” not the natural wonderland I’m sure they envision.

I can understand those people who are proponents of population reduction â€” gradually. Those people who promote the idea of education and responsible family planning can have my ear.Â  I will even listen to (though not necessarily agree with) those who recommend zero population growth by simply aiming to replace ourselves: 1 child per person. But those who say that having children is a selfish, environmentally irresponsible act clearly have no idea what it means to be a parent or the motivation for becoming one. When I look at the photo above of my daughter, how could I ever feel like an eco-villain for bringing her into this world?

I’d love to hear from people on both sides of this issue. All I ask is that the conversation remain civil. As hot as I am right now, I can only imagine the response this will spark in others.